A Round-up of Reviews: Six Gift-Worthy Books Sure to Surprise 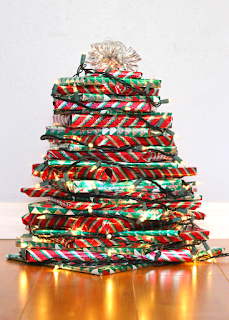 Who doesn't like getting books for gifts? It's my favorite part of holiday gift giving! I haven't gotten as clever as Christie at Raising Whasians with her adorable Christmas Book Advent Tree, pictured above, but lots of books get unwrapped at my house Christmas morning.

One snaggle with choosing books for gifts is worrying if the person has already read the book! Here are some ideas for recently published books that have flown under the radar. There's probably someone on your list who would enjoy one of these:

The Green Years by Karen Wolff is the story of Harry Spencer, a boy growing up in South Dakota in the 1920s, who has to find his own path after his father returned from WWI a broken man. There's some interesting history about the Klan in South Dakota during Prohibition days, as well as romance and a charming coming-of-age story.
This is a good pick for anyone who enjoys a novel with old-fashioned themes. It could be a good one for seniors on your list who might like a story that brings to mind the time of their parents or grandparents.

One Last Lunch: A Final Meal with Those Who Meant So Much to Us by Erica Heller is a collection of essays from 49 people all imagining a final meal with a loved one who has passed away. Contributors include children, friends, acquaintances, and professional colleagues of writers, actors, and other well known personalities, such as Julia Child, Paul Newman, Prince, and Nora Ephron. Heller is the daughter of Joseph Heller, the author of Catch-22, and the book begins and ends with her own essays about lunches with her father.
I love this book. I recommend it for anyone who has lost a loved one. Read my interview with Erica Heller to learn more about the book and what inspired her.

Impersonation by Heidi Pitlor is a quick, clever novel about a Allie Lang, single mom and professional ghostwriter hired to write the memoir of a high-powered lawyer thinking of running for office. The lawyer wants to soften her image with a memoir about what a great mother she is, but has little time for mothering or memoir-writing. The book hits on timely subjects like the 2016 election, the Me Too movement, class issues, and motherhood.
This one is a good pick for the Millennial moms on your lists who enjoy smart chick lit with a feminist bent.

Storm Beat: A Journalist Reports from the Oregon Coast (OSU Press) is a new memoir by Lori Tobias. As a journalist, Tobias has covered the Oregon coast for the last 20 years, writing about small towns, fishing, tourism, crimes, good times, tragedies, and storms -- lots of storms. Her new memoir tells her own story, the story of life along Oregon's 300 miles of rugged coastline, and what's its like to be a working reporter as newspaper industry declines.
I recommend this one for anyone who enjoys good creative non-fiction, the Pacific Northwest, armchair travel, the newspaper industry, or a good memoir.

A Small Earnest Question by J. F. Riordan. This is the fourth book in Riordan's North of the Tension Line series set on Washington Island, a remote island in the Great Lakes. Fiona Campbell is the main character at the center or an eclectic mix of locals, visitors, pets, and even goats for the goat yoga classes. This fourth book involves the grand opening of a remodeled hotel and the island's first literary festival, but the point of the series is to wallow in the charm.
This one is perfect for all the pumpkin spice latte lovers on your list. Riordan brings readers up to speed enough to enjoy this as a stand alone, or splurge on the set of four.

Creole Son: An Adoptive Mother Untangles Nature & Nurture by E. Kay Trimberger, a new memoir about how Trimberger became the single white mother of an adopted biracial son she raised in Berkeley, California. After watching him grow into a troubled youth struggling with addiction, Trimberger helped Marc reconnect with his biological Cajun and Creole biological relatives. Her book explores how biological heritage and the environment adopted children are raised in interact to shape adult outcomes. She also suggests a new model for adoption that creates an extended, integrated family of both biological and adoptive relatives.
This is a good pick for the curious, nonfiction readers on your list who like to learn about something new. And, of course, parents of adopted children.