SPIN: A Novel Based on a (Mostly) True Story by Peter Zheutlin -- BOOK REVIEW 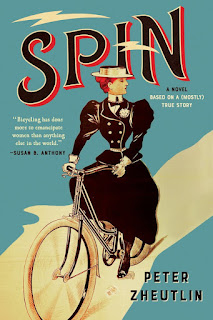 SPIN BY PETER ZHEUTLIN: BOOK REVIEW
SPIN: A Novel Based on a (Mostly) True Story by Peter Zheutlin (2021, Pegasus Books)
In June of 1894, a Boston housewife and mother named Annie Cohen Kopchovsky set off from Boston to go around the world by bicycle. Leaving her husband and three small children behind, she rebranded herself Annie Londonderry in honor of her first corporate sponsor, the Londonderry Lithia Spring Water Co. of Nashua, New Hampshire, whose $100 fee also earned it a logo placard on her bike.

Annie’s tour was supposedly inspired by a bet about whether a woman could accomplish such a trip. As with much of the account of Annie’s adventure, the story of the bet may fall into the “too good to verify” category. Peter Zheutlin calls his new book SPIN: A Novel Based on a (Mostly) True Story because Londonderry was a born storyteller herself with a casual relationship with the truth. She freely embellished her accounts of her travels and was always ready to entertain an audience or the press. She left an extensive trail of newspaper coverage, which is the main source for Zheutlin’s book. But her own account was creative and he filled in gaps with his imagination, so readers are left to sort fact from fiction.

SPIN takes the form of a letter written by Annie in old age to her granddaughter Mary, which allows for a first-person narrative and more insight into Annie’s point of view. Still, SPIN is more than a quirky story of one woman’s adventure. It is the story of the late 1800s, an exciting time in the women’s movement for social equality and the vote. The book looks at how the bicycle radically transformed the lives of women in the late 19th century. There is a quote by Susan B. Anthony on the book’s cover that emphasizes the point: “Bicycling has done more to emancipate women than anything else in the world.” Annie Londonderry’s story is a case in point.
NOTES

Recommended for historical fiction readers, bicyclists, fans of Jules Verne’s Around the World in 80 Days, and book clubs.
Read my interview with Peter Zheutlin, here.