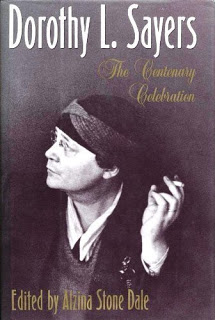 Dorothy L. Sayers (1893 – 1957) was one of the four Queens of Crime of the Golden Age of detective fiction, along with Agatha Christie, Margery Allingham, and Ngaio Marsh. Sayers wrote a series of mystery novels and short stories featuring amateur sleuth Lord Peter Wimsey. Four of the novels also feature Lord Peter's love interest Harriet Vane.
Sayers went to Oxford University where she studied modern languages and medieval literature. She graduated in 1915 with first class honors in modern languages. He received a masters degree from Oxford in 1920. Sayers also wrote plays and poetry. After the success of her mystery novels, she turned to more nonfiction work, writing articles and essays, mostly exploring theological subjects. She also translated classic works, including Dante's Divine Comedy.
I started reading Sayers's Peter Wimsey series a few years back and am almost finished with it. Wimsey has a lot of Bertie Wooster in him and Sayers can be very funny. My favorites are Clouds of Witness and The Nine Tailors. I have yet to read the short stories but will read them all as soon as I finish the last two novels.

Those I have read are in red. Those on my TBR shelf are in blue.

The Unpleasantness at the Bellona Club (1928) (reviewed here)

In the Teeth of the Evidence (1939) (short stories, only two with Lord Peter)

NOTES
Read my interview here of Carole Vanderhoof, the editor of The Gospel in Dorothy L. Sayers: Selections from Her Novels, Plays, Letters, and Essays, an anthology from Plough Publishing House.
Updated on March 30, 2021.