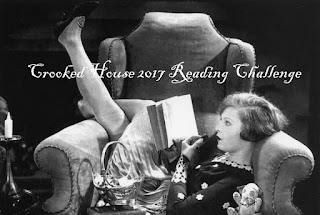 Inspirational blogger and book fan Hannah Braime encourages people to read by hosting a 26-book and 52-book reading challenge every year. Her challenges don't have a particular theme, but each book fits a particular category or requirement -- like a scavenger hunt.

My friend Rachelle, who owns the delightful Crooked House Books here in Portland (and on-line) organized a group of people to undertake the 26-book version of Hannah's challenge. That's why I call this my Crooked House Challenge. She created a Facebook page for the group, for anyone interested in playing along, so feel free to join in.

The rules are simple. To complete the challenge, you have to read 26 different books. Each has to be completed in 2017. One book cannot be applied to more than one category, but books can overlap with other challenges. We are just trying to read 26 books in 2017, not necessarily one book every two weeks, although that is what it will average out to be.


* Our group agreed to change this one a little because there are several people, including me, who have unusual first names. I could spend a lifetime looking for a book with a Gilion in it (pronounced with a hard G by the way, so it's not a funny spelling of Gillian). We agreed to change this one to a book with a character with your first or last name, or a book written by someone with your first or last name. I think I can find a book written by an author named Dumas.

Updated January 1, 2018. The only two I didn't get to were a book with my name in it and a banned book. I just couldn't figure out if any of the books I read had ever been banned. I suspect the Erica Jong book was banned somewhere! And maybe some other books I read. But I've already read all the "classics" that show up on lists of banned books.


Posted by Gilion at Rose City Reader at 11:28 AM 1 comments