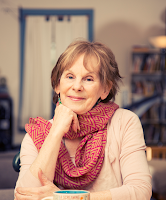 Judith Hooper the author of the new novel, Alice in Bed.

Alice James was the sister of novelist Henry James and philosopher William James. Hooper's historical novel tells the story of Alice's life, mostly through letters with her famous brothers, because Alice has taken to bed with a mysterious illness.

How did you come to write Alice in Bed?

It grew out of a nonfiction book about a preFreudian psychology that sprang up in 19th century Boston. William James was part of it, along with many interesting Boston characters including psychics. When this research did not pan out, I decided to write a novel about William’s “hysterical” sister instead. By then I’d got to know the Jameses and the social and intellectual atmosphere of Boston and Harvard College in the latter half of the 19th century. At first it seemed wasteful to have done extensive research for a book I never wrote, but it ended up being useful background knowledge for Alice in Bed.

Maybe 75 percent is factual and the rest I like to think is plausible. The Jameses (especially Henry) burned the letters they did not want posterity to see. I imagined that when I filled in the blanks I was channeling the letters that went up in smoke. And many of the things Alice says in the novel are drawn straight from her letters and her diary. She was hilariously funny and curiously modern, with the Jamesian flair for highly original utterances.

The James family had its own peculiar culture. Their father, Henry James Sr. was a Swedenborgian mystic who considered colleges and schools to be “hotbeds of courruption” and educated his children privately, partly in Europe. Thus the five siblings—William, Henry, Wilky, Bob, and Alice—grew up like an isolated tribe on an island, with their own language and customs. To capture the flavor of the family culture, thus, I read thousands of James family letters. diaries, notebooks, William’s scientific and philosophical writing, Henry’s autobiographical and travel writing. I also read histories of Harvard College, memoirs and diaries of other 19th century Bostonians. magazines like Godey’s Lady’s Book, as I wanted to know how people talked and thought, what they wore, what life was like for a woman in those days. (Very arduous!)

Can you recommend any other books or resources about Alice James?

There is a good 1880 biography by Jean Strouse, and Alice’s diary has been published. There are several biographies about the entire James family including Alice. Some of Alice’s letters have been published and others are available on the internet. Colm Toibin’s The Master is one of my favorite novels and his Henry James is the genuine Henry James as far as I am concerned.

My background is in nonfiction. I was surprised by the way a novel takes you over and writes itself through you. There is surrender involved. You don’t know where you’re going exactly, your characters have their own life, and you don’t know how many years it will take. But that is the joy of it. You have to let go and trust in something deeper inside you.

When I was in my 20s I loved great stylists like Nabokov, Proust, Virginia Woolf. I still worship every single world-weary, beautiful sentence in Graham Greene. There are scenes in Tolstoy I would give my soul to have written. More recently, Anne Enright’s The Green Road strikes me as a near-perfect novel—along with Colm Toibin’s The Master and Hilary Mantel’s Henry VIII novels. There are too many to mention.

I don’t think there were ever more great novels than there are today (by writers from all parts of the world). At the same time, it has probably never been harder to make a living by writing them.

Have you been influenced by other writers?

All the time, but I learn best from those with a sensibility like my own. For example, The Orphan Master’s Son is an amazing novel but foreign to me, whereas Jonathan Franzen feels like family (literally speaking) and I get a lot from studying his scenes, taking them apart and putting them together again.

Right now literary fiction and the occasional good spy novel. I go through phases. There was a period when I devoured survival memoirs—doomed mountaineering expeditions, stranded arctic explorers, shipwreck survivors adrift on rafts. I had a life-threatening illness and I guess I was working something out for myself.

Risk Hallberg’s wonderful City on Fire. (I moved to New York City in 1976, so his New York is also the one I got to know.) At the same time I’m reading & Sons by David Gilbert and loving that. I confess I sometimes confuse the two.

I have an author website with a page for book groups and instructions on how to contact me. I am on Facebook (but don’t have an author page there) and I tweet now and then as @JudyHooper2. I am not sure if the latter has been helpful.

Just finished a modest book tour in my neighborhood (western Massachusetts) and one in the San Francisco Bay Area, where I grew up. There may be more events in New York City and elsewhere in January.

Write all the time, when you feel inspired and when you don’t. And be very, very patient! I wish someone had told me years ago that the writers I admired probably didn’t have the entire novel worked out in their minds from beginning to end, as if they were just taking dictation from God. I had no idea of the process and concluded I lacked imagination.

I’m working on a novel tentatively entitled How to Disappear and Never be Found. Although the main characters are three teenage girls who make a tragic mistake it is not a YA novel.

ALICE IN BED IS AVAILABLE ON LINE FROM POWELL'S, AMAZON, OR OTHER ON-LINE STORES, OR ASK YOUR LOCAL BOOKSTORE TO ORDER IT!