Review: The Preserve by Steve Anderson

The Preserve by Steve Anderson, published by Skyhorse/Simon & Schuster

Steve Anderson’s new book is a post-WWII thriller set on the Big Island of Hawaii in 1948, when Hawaii was still a US Territory. Wendell Lett, war hero turned deserter, seeks treatment for combat trauma at an isolated facility called The Preserve. Instead of a cure for his jangled nerves, he finds himself caught up in an assassination plot that runs all the way to General Douglas MacArthur.

The Preserve is a first-rate historical thriller. It is fast, dark, and complicated without becoming ridiculous. There are plenty of characters, with relationships and side-stories that enrich the main plot. And Anderson clearly did his research. He salts enough historical fact throughout the book to give it flavor without weighing down the action.

The Preserve is Anderson's second book featuring Wendell Lett, who first appeared in Under False Flags. The two Lett books can be read as stand-alone novels, but are even better read back to back. 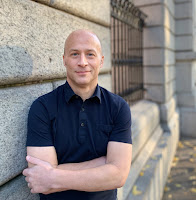 In addition to his two Wendell Lett books, Steve Anderson is the author of three WWII novels featuring the Kaspar Brothers (The Losing Role, Liberated, Lost Kin), a contemporary thriller (The Other Oregon), a crime novella (Rain Down), and other works of fiction and nonfiction. Anderson was a Fulbright Fellow in Germany and is a translator of bestselling German fiction as well as a freelance editor. He lives in Portland, Oregon with his wife and two adventure cats.

Read more about Steve and his writing on his Steve Anderson website. There is an interview of Steve with links to other interviews, including an interview he did for Rose City Reader back in 2010. Among other topics, Steve discusses why he is drawn to historic fiction:

My books tend to involve some overlooked historical theme. I like researching and using historical detail when it helps the story and including a degree of duplicity, often in the form of espionage or crime. I always aim to set up a clear sense of place for the reader. And there has to be loss. If a character is to gain something, something also has to be lost. It’s sad but true and I like realism. There’s truth there, if you can find it.