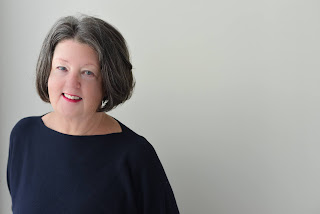 AUTHOR INTERVIEW: CELIA JEFFRIES
In her new novel, Blue Desert, author Celia Jeffries weaves an exciting tale of a young British woman living -- and loving -- among the Taureg nomads of the Sahara in the early 1900s. The story unfolds as Alice tells it to her husband decades later, after she receives a startling telegram.
Blue Desert by Celia Jeffries (2021, Rootstock Publishing) 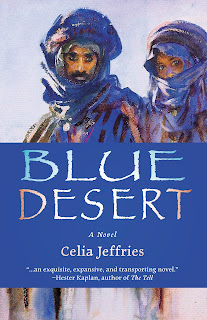 Celia talked with Rose City Reader about Blue Desert, Tuareg culture, favorite authors, and more:
How did you come to write Blue Desert?

Blue Desert began as the voice of an older woman looking back at her life. That "voice" kept appearing on the page now and then as I was writing other pieces, and finally I decided to listen to it, to see where it might take me. The name Alice was clear to me, and the fact that she had a story she had never told anyone was also clear. The rest was discovery.

The main story takes place in the Tuareg society of the Sahara in the early 1900s. What drew you to this setting for your novel?

When you let a character lead the way, you never know where you might end up! I was familiar with Edwardian British society from my love of 19th century/early 20th century writers, but when Alice headed into the Sahara I was a bit clueless. During a writing workshop I read a piece I had just written and a French woman turned to me. “You’re writing about the Blue Men,” she said. Who were the Blue Men? The Tuareg. The French are much more familiar with them, having colonized Algeria and parts of the Sahara.

I read everything I could find about the Sahara and the Tuareg—literature; history; geographical and anthropological overviews; the art, music, and jewelry of the Tuareg. And I watched films made in Morocco and the Sahara. After a couple of drafts of the novel I joined an "adventure tour" to Morocco that traveled throughout the country and made a five-day trek on camel into the Sahara.

I didn’t know how the book would end, and worked on a number of different endings, none of which were particularly satisfying. Once Martin’s character appeared, the ending came into focus. I knew where the story would land in terms of time and place, but the words were more difficult. I rewrote the final page so many times—even as we were going to press!

I became fascinated by the Tuareg society, and the history of the Sahara. Here was a land mass larger than the continental United States that seemed completely hostile to human life. And here was this tribe that had found a way to live in harmony with that environment. Add to that, in contrast to most civilizations I knew, women were valued and held power within their society.

The story demanded that I write about parts of our human character that we often tamp down, excuse, or avoid: violence, greed, sexuality, etc. Just as we all have those impulses within us and we all have to manage them, I had to allow my characters to deal with their own impulses.

For me, one of the themes in Blue Desert, what writing it confirmed for me, is that survival and love can take many forms. What helped Alice survive in the desert was acceptance—of her situation, of the people she found herself among. What helped Martin survive the war was acceptance of the altered state of the world. And what made their marriage work was total acceptance of each other.
What do you hope readers will take away from your book?

I have been fascinated by readers’ responses—so many time readers have found things in the novel that surprise me, and quite frankly humble me. When you create something—a book, a painting, a piece of music—you are tapping into a consciousness larger than your own. I love books that open up the world in a new way and help us understand the human condition. I hope Blue Desert provides a bit of that experience for its readers.
What is your favorite review or compliment you received about your book?

Many readers say Blue Desert should be a movie. What that says to me is that they could “see” the story, that the characters and settings came alive in a certain visual way, which is a great compliment.

What is your background and how did it lead to writing fiction?

I think I was born reading and writing; it feels like breathing to me (and means I have way too many books and notebooks floating about the house). After earning an MA in English and American literature, I worked in education, journalism, and publishing. All of that came together when I returned for an MFA in fiction and creative nonfiction. Journalism taught me to always ask “what is the story?” and to try to tell it as clearly and succinctly as possible. Reading and studying great writers from many different cultures allows the cadence of language to seep into your writing.

There were whole shelves of Readers Digest Condensed books in the house I grew up in. It makes me cringe now to think of "condensing" good writing, but what it meant was that I read widely and way beyond my own childhood understanding. I also sneaked peeks at the illustrated Edgar Allen Poe that my mother had hidden because it was too scary for children, and I found my father’s Modern Library college editions of the classics, some of which I still have.

This is the most difficult question of this Q&A! When I think of an answer I can see that I have moved through many phases of writers. Tolstoy will always stand out for me, even though I turned away from the white male canon for a while. I think my writing is influenced by everything I’ve ever read or experienced. While writing Blue Desert I found myself in awe of Michael Ondaatje’s The English Patient and Anthony Doer’s All the Light We Cannot See, both of which deal with lives braided together by the cataclysm of war. When I wrote this last sentence I realized that was, of course, what Tolstoy also wrote about…

My current stack of books includes Tove Ditlevson’s The Copenhagen Trilogy, George Saunders A Swim in the Pond in the Rain, Flaubert’s Madame Bovary and Francisco Goldman’s Monkey Boy. (That’s just the top of the stack.)

You have a terrific website and are also active on Facebook and Instagram. From an author’s perspective, how important are social networking sites and other internet resources?

I have to confess to being a reluctant social media person who is now a believer. The world is full of readers and the internet is one of the best ways to connect people to books, with surprising results. My favorite surprise was a woman from Tokyo who follows my Instagram. Why? Because she has a beautiful shop and sells Tuareg jewelry!

Be wild in writing and ruthless in revision.

I have a number of private book group readings [in person and virtually] at the moment and am doing a radio interview that will be broadcast later in the summer. Book groups are welcome to check my website if they’d like to set up a private reading. Also check my website for the radio broadcast and other upcoming events.

Are you working on another book?

I am working on a memoir that has been coming together piece by piece, a few pieces of which have been published in literary magazines and online.
THANK YOU, CELIA!
BLUE DESERT IS AVAILABLE ONLINE IN PAPERBACK OR E-BOOK.