Review of the Day: The Rebel Angels 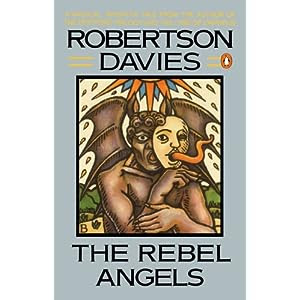 The Rebel Angels is the first in Roberson Davies "Cornish Trilogy" of books with a connection to eccentric art collector Francis Cornish.

In Rebel Angels, three university professors are appointed joint executors under Cornish's will, assigned to sort through Cornish's vast and ill-organized collection of art and manuscripts, overseen by Cornish's nephew and heir, Arthur Cornish. The three also share a connection with the beautiful and scholarly Maria Magdalena Theotoky, a half-gypsy graduate student who has them all mesmerized. Interfering with all is John Parlabane, an ex-professor and former monk now sponging off his friends and writing an incomprehensible tell-all novel.

The cast is crowded and the ideas are big. This is a philosophical novel about philosophy – and theology, literature, heredity, scatology, physiognomy, love and academia. Despite the lofty themes, it is entertaining throughout, very funny in wit and imagery, and with lots of action.

The action, unfortunately, includes perhaps the most perverse sex scene in modern fiction and a particularly cold-blooded murder. Neither are enough to preclude finishing the book, or reading it, but they overshadow the rest of the story.

NOTES
This book shows up on Anthony Burgess' list of the Best 99 Novels.


OTHER REVIEWS
If you would like your review of this or any other Robertson Davies book, please leave a comment with a link and I will add it.

Posted by Gilion at Rose City Reader at 9:26 AM 1 comments