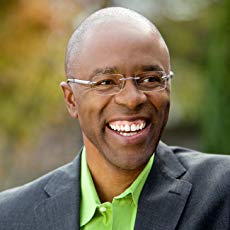 Greg Bell wrote the popular and powerfully motivating book, Water the Bamboo. In his new book, What's Going Well? The Question that Changes Everything he teaches how to build a habit of optimism. 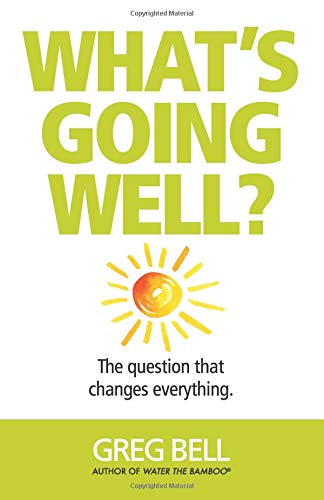 How did you start paying attention to optimism as a mindset?

I would say I’ve always been interested in optimism. From struggles as a kid to struggles in business. I also have a curiosity around why some people have an optimistic mindset in a tough situation and the next person in that same situation doesn’t. I ask myself, what’s the difference?

I see optimism almost connected to some form of resilience. If you think about it, everyone is going to have dips in their lives, whether they are personal, career, money, or anything else. But some people fold and some don’t and I’ve always been curious why.

When I think of optimism, I think back to when I asked my friend the question “What’s Going Well?”—which ended up being the title of my new book—and how it changed him in the conversation that we had after that. He continued to talk for 30 minutes about all these great things in his life. After that, I really started paying attention to my own life.

Why did you write What’s Going Well? The Question that Changes Everything?

Being grateful is an interesting point of view. But I think if you lead with, “hey, let’s be more grateful,” people may agree it’s a good idea but won’t necessarily take action. But if you ask them “what’s going well,” they will actually talk about the things they’re grateful for. I believe this question positively impacts well-being.

The reason I wrote What’s Going Well? is I wanted people to have conversations about things going well in their lives personally, professionally, and all around. I think that conversation will help them be able to deal with their challenges and dips even better. My belief is that this book will help build resilience and overall wellbeing in people.

What is your professional background and how did it lead to teaching people to be more optimistic?

I am a reformed attorney and I was trained to spot issues and problems. A good day for me was having clients that had issues and problems. That work was miserable because all I dealt with was problems; I rarely got a chance to focus on what’s going well. But what I noticed with all of my clients, the problems they had were mostly based on relationship break downs.

I realized early in my legal career that I needed to change and that change led me to start a consultancy based on how to help business people have better relationships with a lot of work around team building and leadership development.

So there I was. I sent an email that said I would talk about ambiguity avoidance and to me that was a joke. How do you avoid ambiguity? And he said, “Yeah, it sounds great,” and I was like, “Oh, no!”

For my first keynote I actually ended up doing a talk called “Ambiguity Avoidance.” It was centered around how to avoid ambiguity in relationships, and it was really well received. I’ve done keynotes for years now, and later I wrote Water the Bamboo: Unleashing the Potential of Teams and Individuals.

Who do you hope will read your book?

What’s Going Well? is for people who are watering their bamboo and striving for more in their career, but they need a little pick-me-up.

This book is also great for leadership teams and teams in general. If an organization or team is thriving and hasn’t taken any time to stop and reflect on all they have and what they are grateful for, this book will help them realign and focus on what’s going well.

There’s another group of people that may have some dips in their lives. It’s not going so well. They really need What’s Going Well? because they need strength to overcome what they’re dealing with.

What makes your book different than other leadership and motivational books?

Most appreciation programs don’t work. They don’t increase engagement. I think one of the reasons they don't is because people are looking to others for appreciation instead of it coming from within. Often times a leader or manager has too many direct reports to be able to show appreciation for everyone all the time. So the trick with this book is really about how do I individually find what’s going well in one’s own work and also share that with peers and coworkers. Keep in mind employees do want appreciation from their boss; that’s definitely true.

In terms of motivational books, I don’t know that I would call this a motivational book. I think “What’s going well?” is an inspiring question that can cause people to focus on the good in their life that already exists. It’s a question that can really inspire someone to be more grateful, which will lead to better health, better resilience, better sleep, a better immune system. I mean the brain research is fascinating on it.

So that’s how I think it’s different. It’s actually a question and not an answer. That’s actually the key. I think a lot of times people are being advised or told what to think. I think asking what’s going well allows the person to direct themselves, which in turn helps them, their teams and helps leadership.

What will readers learn from your book?

I hope that readers learn how the brain works when you focus on What’s Going Well. One of the things that is still hard for me to believe is that when good things happen, they go into your short-term memory; and if bad things happen, they go into your long-term memory. I want people to be aware of what’s happening in the brain and how focusing on what’s going well can help them make a positive brain shift.

They will also learn the benefit of journaling about what’s going well. That’s why I created the What’s Going Well? 90-Day Companion Journal that is a companion to the book. Journaling can help people rewire their brain and re-set their happiness point.

How important is social media for you as an author, speaker and coach?

Accessibility and the ability to connect with a large audience is extremely helpful. I consider myself a conduit for transformative leadership and I think that social media platforms allow me to connect with my audience and deliver value to them.

I did have a surprise writing the book. Many of the materials were stolen when my car was broken into. I don’t know how many journals I had with handwritten notes with concepts for this book. I was pretty ticked off at first but what surprised me is how effective the question what’s going well was to get me back on track. I would say within 24 hours I was laughing about the situation because after asking myself “what’s going well?” I concluded that it will be funny when one day I’ll be speaking to an audience and will explain how “What’s Going Well?” was stolen.

What is the most valuable advice you’ve been given as an expert on optimistic living?

Once you set a goal the first thing that will appear will be obstacles. These obstacles will remain if you take your eyes off the goal. Something will always get in our way and we have to remember why we were there in the first place. We really have no idea what our next thought is going to be or our next emotion. There are so many distractions in our lives and negativity all around us, but remembering what you want is one way to maintain optimism.

What is the most valuable advice you’ve been given as an expert on leadership?

First, lead yourself. Leadership is not a title, it’s about your actions and behaviors. I really think that’s it. If I can’t lead myself, there’s no way I can lead anyone else, right? If I don’t have love for me, I can’t have love for you.

Second, when you are leading a team what you say is not nearly as important as what you do.

What authors do you enjoy reading?

I like some of the old stuff. I like Man’s Search for Meaning. It’s probably one of the most impactful books I’ve ever read by Viktor Frankl. He survived the German concentration camps and he came up with this very interesting term. He said despite the circumstances he would remain tragically optimistic. If he could remain optimistic under those circumstances, I have no excuses.

Do you have anything coming up to promote your new book?

I have a book launch celebration event on April 24th at the Multnomah Athletic Club in Portland that includes a short What’s Going Well? talk, book signing, and light refreshments. Sign up here at the events page of my website.

WHATS GOING WELL? IS AVAILABLE ONLINE OR ASK YOUR LOCAL BOOK SELLER TO ORDER IT!