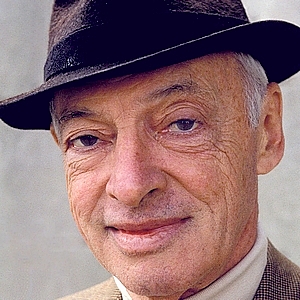 SAUL BELLOW
Saul Bellow (1915 to 2005) may have been born in Canada, but he was an American treasure. He won the Pulitzer Prize once and the National Book Award three times. In 1976, when he won the Nobel Prize for Literature, the Swedish Nobel Committee described his work:

The structure is apparently loose-jointed, but for this very reason gives the author ample opportunity for descriptions of different societies; they have a rare vigour and stringency, and a swarm of colourful, clearly-defined characters against a background of carefully observed and depicted settings, whether it is the magnificent façades of Manhattan in front of the backyards of the slums and semi-slums, Chicago’s impenetrable jungle of unscrupulous businessmen intimately intertwined with efficient criminal gangs, or the more literal jungle in the depths of Africa, where the novel, Henderson the Rain King, the writer’s most imaginative expedition takes place. In a nutshell, they are all stories on the move, and, like the first book, are about a man with no foothold. But (and it is important to add this) a man who keeps on trying to find a foothold during his wanderings in our tottering world, one who can never relinquish his faith that the value of life depends on its dignity, not on its success, and that the truth must triumph at last, simply because it demands everything except – triumphs. That is the way of thinking in which Saul Bellow’s “anti-heroes” have their foundation and acquire their lasting stature.

Bellow is a real favorite of mine. Henderson the Rain King didn't do anything for me, but I think Hertzog and Humbolt's Gift are wonderful.

Here is a list of Bellow's books, from most recent to oldest, with notes about whether I've read it, it is on my TBR shelf, or if it is available from my library as an audiobook.
There is Simply Too Much to Think About (2015) (essays and criticism) FINISHED
Saul Bellow: Letters, edited by Benjamin Taylor, (2010) (correspondence)
Collected Stories (2001) (short stories)
Ravelstein (2000) FINISHED
The Actual (1997) (novella) TBR SHELF

It All Adds Up: From the Dim Past to the Uncertain Future (1994) (essays) TBR SHELF
Something to Remember Me By: Three Tales (1991) (short stories) TBR SHELF

NOTES
This is a redo of a list I first posted back in 2010.
I also have a biography of Bellow on my TBR shelf by Ruth Miller called Saul Bellow: A Biography of the Imagination. I have a lot of biographies of my favorite authors on my TBR shelves. I sledom read authors' biographies, thinking I want to read all, or more of their books before I read their biographies. This is silly.


Posted by Gilion at Rose City Reader at 8:00 AM 0 comments