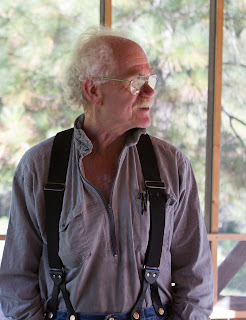 In the 1960s, journalist Malcolm Terence helped found the Black Bear Ranch, a commune near the California-Oregon border that still exists. His new memoir, Beginner's Luck: Dispatches from the Klamath Mountains, is an exuberant record of this piece of America's 1960s history. 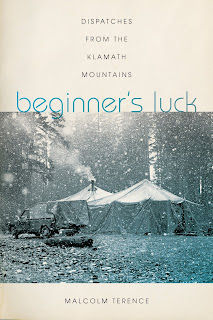 Malcolm recently talked with Rose City Reader about his new book and his thoughts on the 1960s.

How did you come to write Beginner’s Luck?

When I was 15 years old, that’s six decades ago, I started writing for daily newspapers in Arizona. Eventually I ended up as a reporter on the Los Angeles Times. But when I was 25 I felt that being a reporter was too constraining so I headed out looking for adventure. Some friends in LA, very talented musicians, had started a band that played a hybrid of rock and avant-garde, and they needed a manager. They recruited me and we recorded and toured the country for over a year. In San Francisco I met the Diggers, a radical theater group that was starting a commune in the northern mountains so I bailed on the music biz and I moved there.

For many reasons, I stopped writing then, but by the late 1990’s I started again, mostly for regional newspapers in the same rural area where we’d started the commune. I used to tell my daughter stories of the commune and she’d pump me for more and for repetitions of her favorites. That was the start of the book—embedded in the oral tradition.

Also, remember, in the late 1960s our country was as politically divided as it is today. Some of the people at the commune were avoiding the military draft. People had adopted names and there were outlaws of many types. There were many secrets, and I could not have written Beginner’s Luck then.

One of the highlights of your memoir is how you helped found the Black Bear Ranch commune in the Klamath Mountains of northern California. Can you give us an example or two of advice you wished you had before you embraced communal living?

It would be hard to overstate how ignorant we, a crowd of urban refugees, were of living in the woods. I’d lived in Tucson and Los Angeles; I’d never seen snow fall. I remember somehow cutting enough firewood for maybe two weeks for when winter eventually came, and thinking I’d cut way too much wood. “Well, I won’t have to cut any next year,” I told myself.

What were you least prepared for when you moved to the Black Bear Ranch?

The snow, of course, but more than anything, I had always had roommates in my adult life, but within a year there were 60 people living at Black Bear. It was never dull. I watched the advent of the first wave of feminism, and not just of women claiming their rights, but also us men learning to do our share of the domestic labor. If women could cut firewood, and many did, how could we men shirk cooking and taking care of the kids. I attended many home births and was even the only person present when the midwives were late for one birth. We left the world we’d been raised in and set out to reinvent our lives. There were few limits on what we tried. (I confess. Not every path was rewarding.)

How long did the commune last and what path did your life follow after leaving the commune?

The Black Bear Commune still exists. I stayed there for four years. Many people cycled through over the decades and stayed a few years or a few days until they knew what they wanted to learn. Over the years hundreds of people have come through. It was a kind of feral graduate school. I eventually settled down in the small Salmon River towns near the commune, although most of the “graduates” returned to urban life. I worked in gold mining, logging, firefighting and tree planting. As I grew older I started teaching school. Also, the handful of commune vets who moved stayed on the river joined in the political organizing in the river communities on issues like the use of toxic sprays in the forest.

Other than former (or current) hippies, who do you think would enjoy your book?

The answer to that question has two parts:

First, when we were young many of us imagined that we had invented progressive political thought in America. The great attacks on the Left beginning in the 1920s and growing vicious by the 1950s had scrubbed our country of that part of its history. There were exceptions, but it was a mistake that many of us made—the error of discounting or just plain not knowing what went before us. My book Beginner’s Luck treats only one segment of the tectonic political shifts in America in the 1960s, but I wanted to enter it into the record so that part of the national experience would not be lost.

Second, one of the things I learned as a newspaper writer was that a story better hold the reader until the end, or at least pretty near the end. Why write beyond where the reader is going to read? The feedback I’ve gotten from readers since the book was released tell me that I accomplished that goal.

Did you think of turning your own experience into fiction and writing the book as a novel?

I’ve written thousands of articles in my life, all of them as true as I could make them. I don’t know if I could write fiction if I tried. When I left the Times in Los Angeles, I thought I’d left the world of news. News happened in court houses and city halls. It took me years, decades even, to realize that there were stories worth writing everywhere. Some people have called the book a memoir, but I thought of it as reportage.

Do you have recommendations for other books about the counterculture of the 1960s and 1970s? Are any of them personal account like yours?

There are a few other books I love. The first is Sleeping Where I Fall by Peter Coyote. It’s about his life with the San Francisco Diggers, the theatrical and revolutionary gang that started the Black Bear Commune. The second is Fugitive Days by Bill Ayers about his years with the anti-war Weather Underground. The third is Simple Dreams, a memoir by Linda Ronstadt, the singer. All three have been good friends for decades and given me valuable support as the book evolved. All three turn out to be brilliant writers and great witnesses to the epoch.

All the years of newspaper writing made me think book writing would be a snap. Ha! I’m lucky that the editors and the reviewers at Oregon State University Press stuck with me through revision after revision, as the manuscript got more and more readable. They didn’t just say, “It needs to get better.” They’d attach long lists of page-specific suggestions. It was the best series of courses of How-To-Write-A-Book ever offered at any university.

Who are you favorite authors and what kind of books do you like to read?

I mostly read political histories and how-to-fix-it books. My wife and I taught school in Haiti for a year about 20 years ago. I loved the author Madison Smartt Bell. I find myself reading old New Yorkers because they have the best writers. I even read about subjects that wouldn’t ordinarily interest me because I want to see how their writers handle things—they’re the best in the world. Sometimes I think, “I could steal that trick.”

I arrived early for my own book reading at Tsunami Books in Eugene, Oregon, and picked up Michael Pollan’s new book on LSD. Then I forgot to buy a copy. I’ll get one at the next reading. There’s one in Seattle in a week.

Lots of people have advice, not all useful. I remember when I was getting weary from the revisions, so different than the world of newspaper writing. Linda Ronstadt had just published her book, she did it without a ghost writer, and it’s very good. She told me, “You need to work on it every day.”

The newspaper I’ve written the most for in the last several years has been the Two Rivers Tribune, a weekly published by the Hoopa Tribe. They call me their Upriver Bureau Chief, which is kind of cute, but also true. My favorite articles have been profiles about elders. I think, if I do a bunch more of those, it might be the core of a book. Here’s a sample.

That said, suggestions are welcome.

BEGINNER'S LUCK IS AVAILABLE ONLINE FROM OSU PRESS, POWELL'S, AND AMAZON, OR ASK YOUR LOCAL BOOK SELLER TO ORDER IT.