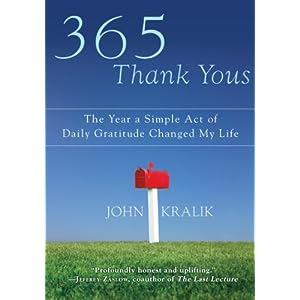 A few years back, John Kralik found himself in a bad spot. His law firm was struggling, his health was poor, his marriage existed only on paper, his girlfriend was going to dump him, his adult children weren’t speaking to him, and he was 40 pounds overweight.

Out for a lonely hike on New Year’s Day, Kralik had a sort of last gasp idea to try to make his life better by being grateful for what he had instead of focusing on everything going wrong. Inspired by a polite note from his girlfriend – and a box of unused office stationery – he decided to write 365 thank you notes as a way to make him concentrate on the good in his life.

365 Thank Yous: The Year a Simple Act of Daily Gratitude Changed My Life is the result of Kralik’s experiment. He hand wrote thank you notes to his children, his clients, his employees, his friends, his doctors, and even his Starbucks barista. His life changed profoundly for the better. Without giving away the ending, suffice it to say that Kralik was in a much better position at the end of his project.

His story is a little bit “power of positive thinking,” but much more analytical and far less saccharin than the premise may suggest. Good things happened to Kralik when he wrote his thank you notes, but it is clear that it was the efforts behind the notes that caused the changes.

For example, Kralik decided to start with what he thought would be an easy note – one thanking his older son for his Christmas present. But when he went to send the note, Kralik realized that he didn’t have his son’s address. They were so estranged that he didn’t even know where his son lived. He had to call for the address, which led to his son inviting him to lunch, where his son finally paid him back $4,000 he had borrowed. It was the effort of reaching out to his son that lead to the beginning of a reconciliation, the elimination of Kralik’s resentment over the money, and, incidentally, the easing of some of Kralik’s financial stress. It was the thank you note project that set the ball in motion.

The book is filled with similarly encouraging anecdotes. Each will hit readers differently, some inspiring more than others. One that caught this lawyer’s attention was about how writing notes to clients who paid their bills on time forced Kralik to assess which of his clients were worth keeping and which needed to be cut loose -- an important business lesson for any professional.

All in all, 365 Thank Yous is a terrific, uplifting book that reminds us all to really focus on the good in life and to express our gratitude in simple, sincere ways. If it also promotes a proliferation of handwritten notes, I’m all for it.


OTHER REVIEWS
If you would like your review of this book posted here, please leave a comment with a link and I will be happy to list it here.


NOTES
I send a big THANK YOU to my law partner Mark O'Donnell for giving me this book.

Posted by Gilion at Rose City Reader at 4:46 PM 6 comments