Review of the Day: Eden Springs 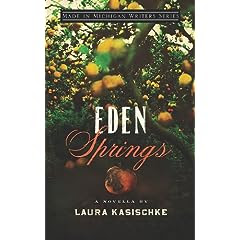 Laura Kasischke’s moody novella, Eden Springs, is a historical mystery of sorts, based the true story of a spooky religious colony on the shores of Lake Michigan in the early 1900s. The House of David in Benton Harbor, Michigan, was founded by Benjamin Purcell as a lakeside Eden where he and his avowedly celibate followers could await the Second Coming.

The colony thrived for many years, becoming rich first on fruit crops, later on proceeds from the Eden Springs amusement park. Followers of “King Ben” ran the park, staged musical performances, and fielded a baseball team famous for the players’ long hair and untrimmed beards.

From this factual background, Kasischke pulls at a loose thread of scandal, focusing on King Ben’s predilection for sleeping with his young female converts. Kasischke creates a narrative collage from third-person and first person fictional accounts, excerpts from contemporary news articles, court documents, Purcell’s own writings, and vintage postcards of the colony and park.

From this mix comes a story of religious fervor, egomania, lust, jealousy, and murder. Eden Springs is a captivating little book that linger long after the last page is turned.

NOTES
Eden Springs is part of the Made in Michigan Writers Series published by the Wayne State University Press.

This review first ran in the February 2010 edition of the Internet Review of Books.

OTHER REVIEWS
(If you have reviewed this book and would like your review posted here, please leave a comment with a link and I will add it.)