Thanks for joining me for Mailbox Monday! MM was created by Marcia, who graciously hosted it for a long, long time, before turning it into a touring event (details here).

Abi at 4 the Love of Books is hosting in May. Please visit her fun, inspirational blog.

Two random books came into my house last week, both from books lists I'm working on.

Death and the Joyful Woman by Ellis Peters. This is the second book in the Inspector Felse series and it won the Edgar Award in 1963. I have the first book in the series, Fallen into the Pit, already on my TBR shelf.

Trust by Cynthia Ozick. I have never read anything by her, but this one -- her fist novel -- is on the Erica Jong list of Top 100 20th Century Novels by Women. The amazon reviews don't do it any favors.

The counters are in! 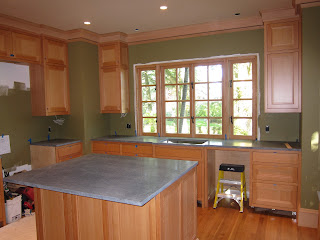 The soapstone is beautiful, although it is still in its pre-waxed state, so it is a pale greenish grey.  Once it gets waxed (or oiled), it will be a dark charcoal grey, almost black. I watered down the island top, below, to get an idea of what it will look like. 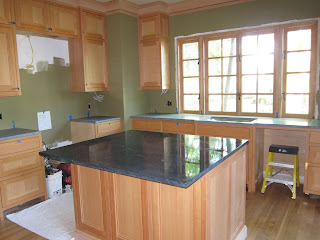 I’ve been reading Lavinia by Ursula Le Guin all week. It is the story of how Aeneas (of Vergil's Aeneid) fought the locals of Latinum, married the king’s daughter Lavinia, and founded Rome – told from Lavinia’s perspective. There is nothing food-related in it, except for several scenes of sheep sacrifice and an interesting bit about collecting sacred salt from sea mud.

So instead of reading about food, I’ve been daydreaming of writing about food. Specifically I’ve been fantasizing about the upcoming Cook N Scribble food writer’s retreat at the Tutka Bay Lodge near Homer, Alaska in July. Called “Food, Nature and the  Writer’s Wild Mind,” the retreat is facilitated by authors Molly O'Neill and Carolyn Forché.

It sounds like a heavenly five days of eating, exploring, writing workshops, and a cooking class, culminating in a LongHouse Food Revival billed as “a gathering of food thought leaders” -- more precisely, “an evening celebration of poetry readings, with a local seafood slam dinner by acclaimed chefs.”

Big thanks to everyone who has left comments and good wishes on these kitchen remodel posts. It has been particularly interesting to hear about other people's remodeling projects. Thanks!

Posted by Gilion at Rose City Reader at 9:29 AM 8 comments