Author Interview: Stanley Flink, Due Diligence and the News 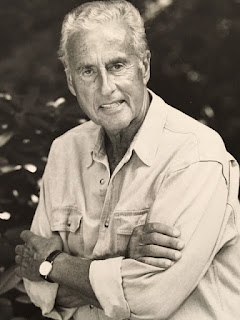 Stanley E. Flink had a long career in journalism before teaching "Ethics and the Media" to journalism students for over 25 years. His new book Due Diligence and the News: Searching for a Moral Compass in the Digital Age is a collection of essays drawn from his lectures. The book is timely, readable, and captivating for any newshound, whether journalist or news junky. 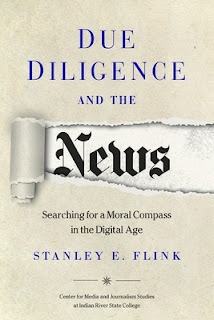 Stanley Flink talked with Rose City Reader about Due Diligence and the News, social media, journalism, and ethics:

How did your book, Due Diligence and the News, come about?

After teaching a seminar called “Ethics and the Media” for more than 25 years, beginning at New York University Journalism School and then for many years a Yale undergraduate course, I encountered a great paucity of knowledge about American history---particularly in the Constitutional rights area. For example, after engaging with hundreds of students, it was clear that only a handful knew how many rights there were in the First Amendment. Even the brightest young people were unable to describe the major Supreme Court cases involving freedom of the press. There were exceptions, of course, but very few.

When I retired and came to the lifecare institution I live in now, they asked me to adapt my seminar for the people who were my friends and neighbors. I did so with some reluctance because I didn’t believe there would be much interest. I began lecturing once a week and did so for about a year before settling on every other week. (Let’s face it, I am, after all, retired.) In any event, what emerged was a great deal of interest and remarkable attentiveness. Forty to fifty people showed up for more than four years of these lectures, and many of them wanted to discuss the ideas in separate meetings.

That’s when I decided to write the book. I wanted it to be a kind of portrait of freedom of expression that covered history, legal conflicts, technology, and the future. I selected what I believed to be the most important events, issues, and key figures in the evolution of free expression in America. Surely there are other sources and examples, but I am content with my selections. I hope these essays, taken together, will provoke a greater interest among the readers in the importance of free expression, and at least a useful understanding of how that presence developed in our democratic system.

What is your work background and how did it lead to your writing essays on the relationship between the press and American civic life?

My background is largely in the field of journalism. I was the editor of my high school newspaper, and in college I was a columnist. Towards the end of World War II I spent a little time working for Yank magazine, and immediately after graduation, in 1948, I went to work for Life magazine. When television news matured and began to assume a major role, I joined NBC News and later CBS.

Throughout my experience in each of these places, I became increasingly aware of the ethical issues that inevitably arise in reporting the news. I talked about it a lot with my colleagues and read many of the books that were being published each year on the subject of a responsible press. I wrote one of those books myself, called Sentinel Under Siege, which was published in 1999. Before that, in the 1980s, I had been asked to teach a seminar at NYU Journalism School (mentioned earlier). That was the beginning of an interesting focus ever since.

Who is the audience for your book?

I envisioned high school seniors and college freshmen, but I’ve been surprised at how many people of all ages have written me about the book.

What do you hope people will learn or think about when they read your book?

I hope they will become sharply aware of the significant role that a free and responsible press has in our society. I would also hope they will think more urgently about truth and trust in a democracy. The technology has changed the environment in which information and news are conveyed so fundamentally that journalism has to devise new methods and styles of expression.

How do you see social media changing traditional media when it comes to delivering and consumption of straight news?

I see social media as a great threat to the respect for truth. I chose the title Due Diligence and the News because I realized that there was no easy formula for combating the effects of falsity and deliberate fabrication that can manifest themselves on social media platforms, except the careful weighing of fact-based evidence that we call “due diligence.” The enormous size of the circulations of social media on various platforms, and their ability to target audiences, provides limitless opportunities for deception and manipulation. There is no way to identify carefully constructed falsification and distortion of news material except by the most thorough research and comparison and fact-checking.

The major platforms like Facebook can reach millions of people repetitively and insidiously overnight. Obviously, they influence all kinds of activities including voting patterns. The problem in finding a remedy to fight deliberate falsification and distortion is to avoid limiting freedom of expression in the process. I came to the conclusion that there has to be a reevaluation of the First Amendment which will produce some discipline over deliberate misuse of a free press. The damage that can be done by these massive circulations online---often politically targeted---is so great that the means of preventing or managing their use becomes essential.

This dilemma may require legislative and regulatory innovations, but if it is left to the voluntary actions of the corporations that own the platforms, I fear profit will overwhelm principle. Confronting this problem is probably the most difficult and significant challenge the modern news media faces. Public affairs news reporting is vital to the survival of democracy and cannot be left, in my view, to vague assurances of voluntary action.

I do believe that the two most important factors beyond corporate control, are due diligence and education. Quite a few states have already mandated public school curriculums to include courses in “media literacy.” These programs examine and help to reveal the issues of falsification and misuse. They are reportedly doing well and deserve our support. Education in general deserves our support. There remains the reality that no matter what actions are taken, people who want to use the news media to serve their special interests will find ways that may escape detection. The question then becomes for how long, how deeply, and what corrections are possible.

What is the role of the public, the consumer, in watchdogging the press?

The public has a major responsibility which is, as already cited in these comments, due diligence. The public, however, needs help, which should come from education, fact-checking services, and individual voices of conscience and ethical perception. These voices might be teachers, columnists, writers or philosophers---sometimes called public intellectuals. The single most important factor, in my view, is greater awareness of the need for truth. If we do not respect truth, we will never be able to engender trust. And if we cannot trust our leaders and our press, we cannot sustain democracy.

Can you recommend additional books or resources for people who want to learn more about media and the ethical issues you raised in your book?

I will limit myself in this answer to a few of the books I find the most useful: Alexis de Tocqueville’s Democracy in America; John Stuart Mill’s essay On Liberty; Walter Lippmann’s books, especially Public Opinion; Alexander Bickel’s The Morality of Consent; Richard Clurman’s Beyond Malice; Eugene Goodwin’s Groping for Ethics in Journalism; Edmund Lambeth’s Committed Journalism: An Ethic for the Profession; and Gordon Wood’s The Creation of the American Republic.

The strong connectedness of ideas and commitment to freedom of expression that flows through the history, the philosophy and the education of America since the founding. And, all along the way, the inescapable fact that what is in the public interest doesn’t always interest the public.

What’s next for you?

Due Diligence and the News is available online, like all books these days.

And see Stan Flink on YouTube, discussing his book Due Diligence and the News.