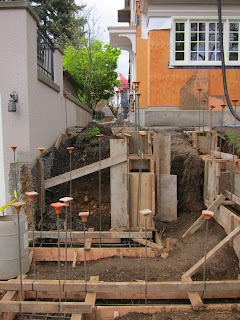 Progress inside the new kitchen was slow this week.  There was some more cabinet work, not much.  But enough to see what the upper cupboards will look like.

The heavy hauling was on the outside, where they tore out the old, crumbling staircase and set the stage for the new, as seen in the rebar jungle above.  The plan is for a new series of stairs, retaining walls, and garden beds that will connect the street-level garage doors (to the bottom left of the photo) to the terrace on the garage roof (top left in the photo, with the black railing) and a large stoop outside the kitchen door (top center in the photo).

Now that I see it in progress, the whole outside part of this kitchen remodel seems like a far bigger undertaking than when I saw it on paper.

Since it is still chilly and drizzly here in Portland, I spent some time yesterday finally finishing Independent People, the novel about WWI-era Iceland sheep farmers by Nobel Laureate Halldór Laxness.  There was nothing food-related in that book. The people were often half-starved through the Iceland winters. They ate grass.

I also finished Alice Waters and Chez Panisse: The Romantic, Impractical, Often Eccentric, Ultimately Brilliant Making of a Food Revolution by Thomas McNamee.  That book was all about food -- cooking, eating, and changing the way America thinks about food.  I hope to get a review written and up soon.

Posted by Gilion at Rose City Reader at 9:42 AM 8 comments