Review of the Day: A Year in the World 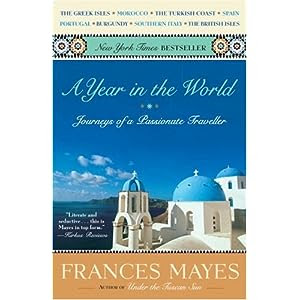 Frances Mayes did not spend one year traveling around the world and then writing about it in A Year in the World. She spend five or so years taking various vacations to places, mostly in Europe, writing about them, and then collecting the essays in calendar order with the idea that the collection would give the idea of a year of travel.

Judging from amazon reviews, her approach left many people seriously miffed because she did not actually drop out of her regular life and do all her traveling in one year, on a restricted budget. These reviewers also griped because they expecting Mayes to travel to the far corners of the globe, not just a relatively small section of southern Europe, Turkey, Morocco, and a bit of Scotland.

Such criticism always make me smile because they seem so off the point – like complaining that Mastering the Art of French Cooking contains no Thai recipes. This was the book Mayes wanted to write. She did not want to write about backpacking in Asia or South America and roughing it with the natives.

For me, this was the perfect kind of armchair travel book to feed my wanderlust fantasies. Mayes and her husband traveled to the places I have been and like to remember, like the Cotswolds and Capri, or would like to go, including Portugal, Spain, Greece, and parts of Italy unfamiliar to Mayes from her “Under the Tuscan Sun” home. They stayed in nice hotels or rented houses, often with friends; ate in nice restaurants or shopped in local markets to try their hand at cooking local dishes; and visited a lot of museums.

She writes about their trips the way a close friend would tell you about her vacation – hitting the high spots, filling in a few colorful details, and leaving out practical tips. The stories are pleasant to listen to, even if they do not give practical travel advice and get a little shaggy.

As a plus for book lovers, Mayes often read local authors or books about the places where she traveled, and incorporates her thoughts about these books into her essays. For example she wrote extensively about the poet Federico García Lorca when they went to Andalucia, Spain, and Giuseppe Tomasi di Lampedusa’s novel, The Leopard, when they went to Sicily. For anyone who enjoys themed reading when traveling, these literary digressions were highlights.

NOTES
Because Mayes writes so extensively about the books she reads on her travels, this book counts at one of my choices for the Bibliophilic Books Challenge.

(If you would like your review of this or any other of Frances Mayes's books listed here, please leave a comment with a link and I will add it.)