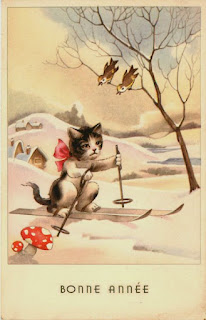 January 1, 2023 is the first day of a mammoth War & Peace readalong over on Instagram, hosted by @renie_reads and @footnotes.and.tangents. The plan is to read one chapter a day and we will be finished before next New Year’s Eve! The hashtag for the readalong, if you are interested in playing along, is #whiskyandperseverance, or #warandpeace2023 for those readers not inclined or too young for whiskey.

I'm ready! I read the first chapter today. I plan to read one chapter a day. But if that gets too crazy-making, I may read seven chapters each weekend to be ready for the group chat the following weekend. Or, just read at my own pace and chat as I can. We will see how it goes. 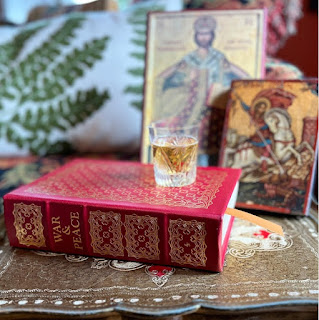 This is the first time I’ve read Tolstoy’s masterpiece, so I dragged in my Russian icons to give me a little saintly support! That, and the whiskey.

Hubby gave me the fancy Easton Press edition for Christmas. Mine is the Aylmer and Louise Maude translation, with one twist. Maude and Maude lived in Moscow, spoke fluent Russian, and knew Tolstoy. Tolstoy gave his stamp of approval to their 1922-23 translation of War & Peace. They later revised their translation for a 1938 Heritage Press special edition. It’s this 1938 revised Maude & Maude translation that Easton Press used for this one, which was part of its set of The 100 Greatest Books Ever.

Have you read War & Peace? Is it worth it? Did you make any of your own bookish resolutions for 2023?


Posted by Gilion at Rose City Reader at 8:00 AM 1 comments