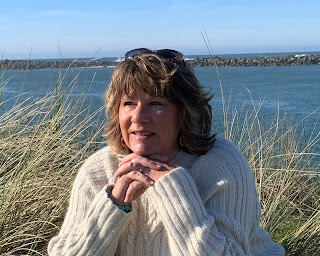 Journalist Lori Tobias has covered the Oregon coast for the last 20 years, writing about small towns, fishing, tourism, crimes, good times, tragedies, and storms -- lots of storms. Her new memoir Storm Beat (2020, OSU Press) tells her own story, the story of life along Oregon's 300 miles of rugged coastline, and what's its like to be a working reporter as newspaper industry declines. 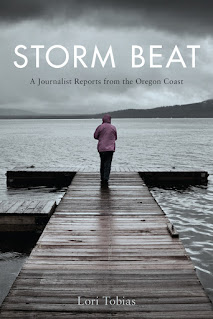 Lori talked with Rose City Reader about Storm Beat, life on the Oregon coast, and the story that didn't make it into her book:
How did you come to write your new book, Storm Beat?

Early on in this beat, I experienced odd coincidences and personal interactions that planted the idea that one day it might make for a book – especially given the setting of the Oregon coast, which I think is much loved and unlike anywhere else in this country.

What is your favorite part of being a journalist in a coastal and rural community?

The authenticity of the people and lifestyle.

What were you least prepared for when you moved to the Oregon coast?

Can you tell us any stories that didn't make it into the book you wish had?

I am so glad you asked that. There are several, but one that stays with me is an armed robbery at a lounge in Florence. It was early in the morning and the staff was just getting the place ready for opening. A guy came in through the back, threatened to kill everyone, tied them up in the office and took all the money in the safe. When he left, they untied themselves, but it turned out he was still there. He tied them up again. This happened three times. He was very convincing about his intent to kill anyone who didn’t obey his commands, adding if anyone else – like a vendor – showed up, he’d kill them all. Finally, he was gone. The manager looked out front and there was the carpet cleaner. He’d arrived only moments after the robber left. I didn’t include it in the book because I tried to include only stories in which there was information that had not run in the paper.

Who do you think would enjoy your book?

People who live in the Pacific Northwest, armchair travelers, journalists, and fans of memoir.

So far, I’ve been blessed with some pretty amazing reviews and comments. I’ll share a few favorite lines:
Did you think of turning your own experiences as a journalist into fiction and writing the book as a novel? Or maybe a series of novels?

I went back and forth on fiction vs. memoir. But in the end, I couldn’t find a good reason to fictionalize it as I had all the material necessary to write it as memoir. And in truth, fiction is much harder for me.

Honestly, I’ve been writing for so long, I’m not sure there are any surprises.

If you could have one person you admire (living or dead) read your book, who would it be?

Who are your favorite authors and what kind of books do you like to read?
I love memoir, but also read a ton of fiction. Favorites: Alexandra Fuller, Ann Patchett, Richard Ford, Mary Karr, Lynn Schooler. I’m not a big non-fiction reader, but I find Laurence Gonzales’ work fascinating.

What are you reading now?
Monogamy by Sue Miller (another favorite). Just finished The Pull of the Stars by Emma Donoghue and am about to start Pale Morning Light with Violet Swan by Deborah Reed.

What is the most valuable advice you’ve been given as an author?
Persevere.

What’s next? What are you working on now?
Well, I’m married to a power lineman (newly retired). When we were young, we did what’s called in the trade, “tramping,” — those are the linemen who follow the big construction jobs, the storms, disasters. We did that for 15 years, moving from Alaska to Pennsylvania to Connecticut, Seattle, southern Oregon (which is how we discovered the Coast) to Denver and at last, to the Coast. It’s called A Tramp Book, and while it’s about linework, it’s also about becoming who I am. A journey, both physically and emotionally.
THANK YOU, LORI!
STORM BEAT IS AVAILABLE ONLINE IN PAPERBACK OR KINDLE.