Review of the Day: Gormenghast 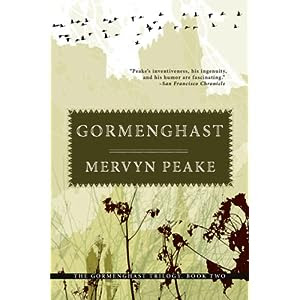 Many characters return in this volume: Steerpike is still the villain – now plotting an elaborate take over as the Master of Ritual. The Countess mother is still the batty, bird-loving recluse she was, although she rises to a period of fierce capability when saving the castle’s citizens from an incredible flood. Titus’s sister Fuchsia is still sad. Flay is still in exile, although protecting the castle in secret. The twin aunts are still crazy and are driven even crazier. And Dr. Prunesquallor and his nitwit sister still tie the social fabric of Gormenghast together.

The major addition is the introduction of the professors, a large crowd of eccentric academicians with funny, Peakesian names like Flannelcat, Shred, Shrivell, Mulefire and Perch-Prism, who dominate Titus’s childhood. Major scenes involving these worthy tutors are highlights of the book, although they do not move the central plot forward. One involves a terrifying game played by the schoolboys while their schoolmaster sleeps at his desk. The other is the fabulous party the Prunesquallors throw to find a husband for Irma.

The book is less about plot – although there is a central story around Steerpike’s attempted coup and Titus’s coming of age – as it is about the richness of Peake’s detailing. Reading Gormenghast is like being lost in an elaborate Medieval tapestry.

OTHER REVIEWS
(If you would like your review listed here, please leave a comment with a link to your review and I will add it.)