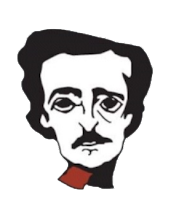 THE EDGAR AWARD FOR BEST NOVEL
2021 was the 75th anniversary of the Edgar Awards, the prestigious award for mystery writing from the  Mystery Writers of America. I'm working my way through the list of winners of the Edgar Award for Best Novel.
The Edgar Award is named in honor of Edgar Allen Poe, 19th Century American author of spooky stories. Watchful at Night by Julius Fast won the first Edgar Award, then in the category of "Best First Novel by an American Author." The "Best Novel" category has been around since 1954.

So far, I've read 32 of the 67 Best Novel winners, roughly half. Those I've read or are on my TBR shelf are noted in the list below.
2022 Five Decembers by James Kestrel
2021 Djinn Patrol on the Purple Line by Deepa Anappara ON OVERDRIVE
2020 The Stranger Diaries by Elly Griffiths ON OVERDRIVE
2019 Down the River Unto the Sea by Walter Mosley ON OVERDRIVE

2017 Before the Fall by Noah Hawley FINISHED

2016 Let Me Die in His Footsteps by Lori Roy FINISHED

2012 Gone by Mo Hayder ON OVERDRIVE

2011 The Lock Artist by Steve Hamilton

2010 The Last Child by John Hart ON OVERDRIVE

2008 Down River by John Hart FINISHED

1994 The Sculptress by Minette Walters

1992 A Dance at the Slaughterhouse by Lawrence Block FINISHED

1980 The Rheingold Route by Arthur Maling

1979 The Eye of the Needle by Ken Follett FINISHED

1978 Catch Me: Kill Me by William H. Hallahan TBR SHELF

1974 Dance Hall of the Dead by Tony Hillerman FINISHED

1973 The Lingala Code by Warren Kiefer

1972 The Day of the Jackal by Frederick Forsyth TBR SHELF

1971 The Laughing Policeman by Maj Sjowall, Per Wahloo FINISHED

1968 God Save the Mark by Donald E. Westlake FINISHED

1964 The Light of Day by Eric Ambler TBR SHELF

1963 Death and the Joyful Woman by Ellis Peters FINISHED

1961 The Progress of a Crime by Julian Symons

1960 The Hours Before Dawn by Celia Fremlin

1959 The Eighth Circle by Stanley Ellin

1957 A Dram of Poison by Charlotte Armstrong TBR SHELF

1954 Beat Not the Bones by Charlotte Jay TBR SHELF

Updated December 28, 2022. This is an updated and refreshed version of the list I first posted in 2009. Even though it is one of my favorite lists, I may not keep updating the winners after 2022. My enthusiasm for prize-winners is waning with the 2020s. I may focus my efforts on reading the winners up to 2020 then declare victory and move on to other bookish projects.

OTHERS READING THESE BOOKS

If you are also reading Edgar winners, please leave comments with related posts like your lists and reviews and I will list them here.