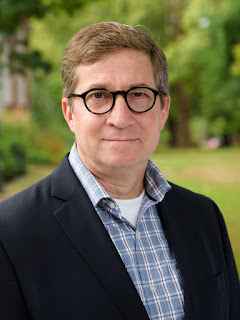 Kevin T. Myers has worked as a stand-up comic, comedy writer, journalist, editor, speechwriter, and media liaison, among other jobs. He grew up in Massachusetts and now lives in Portland, Oregon where he works at a spokesperson for Reed College. 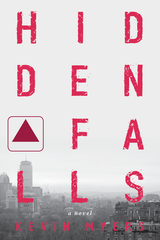 Kevin talked with Rose City Reader about his new book, Hidden Falls, its New Bedford setting, and what books he likes to read:

How did you come to write Hidden Falls?

When I began Hidden Falls, I was emerging from a dark time when I was processing a lot of old trauma through my writing. I set out to write the book I wanted to read to help lift me out of that place. At the time, my guilty pleasure (read: obsession) was reading the missed connections classifieds. It was a carnival midway of ideas, emotions, magical thinking, hope, optimism, denial, and sometimes depravity. Mostly it was filled with romantic souls exposing their secret desires to the world in hope of finding a connection. So, I started to write a comedic love story whose protagonist was pursuing a relationship through an ad he found.

I don’t write following an outline, and somewhere along the way my protagonist, Michael Quinn, went lookin’ for trouble. The original story almost necessitated that Michael be an unreliable narrator. As I dug deeper into why he was so lacking in self-awareness, his backstory became more interesting to me than what I was writing. Had I not had that false start, I don’t think Michael would have been as interesting, and I don’t think the book would be as fun.

The setting of New Bedford, Massachusetts, is key to the story because the location shaped the personalities of many of the characters. Why did you choose New Bedford?

Well, nobody had ever written a decent book connected with New Bedford. I was going to begin with the line, “Call me Michael.” Kidding. The story of Hidden Falls was invented whole cloth. It is also deeply rooted in the milieu of New England’s lower middle class, where I was raised. As I get older, I find myself becoming more appreciative of what I think was a pretty unique upbringing. In the first draft, Michael was from my hometown of Peabody, Massachusetts, but when the story started taking on elements of crime, I decided to change it to New Bedford. Not because of how it would reflect on the city, but because illegal gambling was so prevalent in Peabody that I didn’t want people to mistake the book for a memoir.

I chose New Bedford because I think it is the archetype of the kind of New England town I wanted to write about. The once great centers of now dead American industries. At one time, Peabody was to leather tanning what New Bedford was to whaling. The towns’ high school teams are named the Tanners and Whalers. We took great pride in an era and trade we never knew. It’s part of our heritage. The people from my hometown have a special bond that’s not easily explained. There’s also a connection to sports, professional and otherwise, that a lot of people who have never been exposed to that environment don’t understand. I wanted to explore those themes and I thought New Bedford was a great place to do that.

Your book is a mix of family drama and gangster story, kind of Richard Russo meets Elmore Leonard. Did you plan it that way or did the story take a turn as you went along?

The writer/director Judd Apatow said Hidden Falls was like Dennis Lehane meets David Sedaris; a theme seems to be developing that I’m really enjoying. I read Russo’s Straight Man around the time I started Hidden Falls. I never thought it influenced my book, but now you have me wondering. To answer your question, the book evolved into what it became. The characters lead me into the family drama and gangster stuff. I was about 30,000 words into what I was calling Missed Connections when it really became a different book. I went back and threw out most of it and reworked a few things. The rewrite was very intentional. I added some characters and gave others more of a voice.

The idea of combining genres was inspired by the French New Wave. I studied filmmaking in college and became fascinated by the idea of altering the construction of a film’s reality as it progresses. In Hidden Falls I wanted the narrator, Michael Quinn, to gradually ease readers from his workaday life in Portland to his extraordinary life in New Bedford without hitting readers over the head. That’s why there is an emphasis on Michael’s internal dialogue. His Portland concerns don’t go away, they just change perspective as he falls deeper into the realities of his life in New Bedford.

What do you admire most about your protagonist Michael Quinn? What is his least endearing trait?

I think what I admire most is that Michael is his willingness to take in new information, learn from it, and adapt his behavior as a result. He’s slow on the uptake, for sure, but he eventually gets there. His least endearing trait is still endearing when it’s not infuriating. He has a little Walter Mitty in him, but his fantasy life is more functional than fantastic. Michael is an editorial writer for the fictional Portland Daily, and his lack of self-awareness expresses itself in his columns; they are more aspirational than accurate when he’s writing about his own life.

What did you learn from writing Hidden Falls – either about the subject of the book or the writing process – that most surprised you?

I learned to trust my process and my instincts. I’ve been writing for a very long time, but only started writing novels about 10-years ago. My first manuscript was never published. I read it recently and totally understand why. It was very stiff. I made all the obvious choices. It was like I was imitating someone else’s writing. With Hidden Falls, I just listened to my own voice and gave the characters freedom to explore. My first manuscript was written while I was in a writing group and it reads like it was written for the group’s approval rather than my own creative expression. To be clear, that was my fault, not their influence. There were some really good writers in that group, but I think I was more concerned with impressing them, or at least not embarrassing myself—I lacked confidence as a writer at that time. What surprised me was following my process and trusting my instincts brought Hidden Falls to places that I didn’t foresee.

What is your professional background? How did it lead you to writing this novel?

My resume looks like a shotgun blast. I started out my adult life as a standup comic and comedy writer in Hollywood, including writing for the Archie comic strip. I was an agent for syndicated newspaper columnists, like Hunter S. Thompson and Ann Landers. Then I wrote screenplays and directed a low budget feature film. I sold newspaper ad space and wrote movie reviews for the Concord Monitor in New Hampshire and became the first editor of their website. I was a bartender. I moved to Alaska and did communications for the Sierra Club; trained as a bagel maker; was the morning news anchor for the pop radio station. I was the general manager and editor of the Capital City Weekly, which all lead to my first job in Higher Education at the University of Alaska Southeast. Now, I’m the director of communications for Reed College.

I’ve always tried to move in a direction that would sharpen my skills as a communicator, and my career choices have given me a lot of life experience from which to draw.

I don’t know that I’ve ever been given a single piece of advice about being an author that was all that valuable. The most useful advice came from my standup days—it’s some version of find your voice. There are no tricks or shortcuts, you have to put in the work. I was talking about this recently with a group of writers. I’ve been to scores of readings and lectures by wonderful, talented, and successful writers; but it’s seldom you hear the same piece of advice twice. All the contradictory counsel leads me to believe that the best advice is to find what works for you.

This is a tough one. I do think I my writing is more influenced by specific books rather than certain authors, but there are writers who blow me away like, Ishmael Beah. Radiance of Tomorrow has stayed with me from the moment I first picked it up. It’s so beautifully written. It’s filled with love and hope while navigating the most horrific setting imaginable. In some ways it’s like Cormac McCarthy’s The Road, I couldn’t put it down, but I didn’t want to read on. Shirley Jackson’s The Lottery was the first piece of writing that I have carried with me my whole life, and I love The Haunting of Hill House for very different reasons – it’s funny, quiet, and meticulous in its exposition of a mind unraveling. Fitzgerald’s The Great Gatsby was the book that made me want to be a writer. I also love Kurt Vonnegut, Peter Rock, Dennis Lehane, and David Eggers.

I recently finished Peter Rock’s, The Night Swimmers, which I highly recommend, and now I’m about halfway through Peter Stark’s Astoria. Evidently, I’m going through a Peter phase.

What do you do to promote your book? Do you use social networking sites or other internet resources?

I have a website that has links to some of my other writing and some of the nice things people have said about Hidden Falls. I also have an author Facebook page where I have recorded a few readings from the book.

Well, I bought a Ferrari with my anticipated royalties from the book. So, there’s that. I’m working on a novel manuscript that’s set during the late ’70s in my hometown of Peabody, Massachusetts. The story takes place as the last of the factories are folding up and leaving town. The protagonist is going into his freshman year of high school and desperately wants to make the varsity basketball team—but the book is really about coping with sexual abuse in an environment of toxic masculinity.

HIDDEN FALLS COMES OUT JULY 15 AND IS AVAILABLE FOR PRE-ORDER ONLINE NOW.