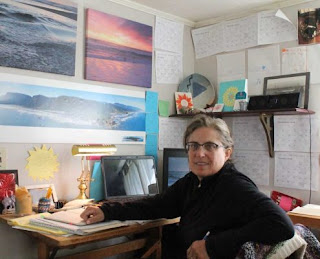 When Julia Laughlin was 21, she was sexually assaulted by a man she had known and trusted, a man later tried for her assault and as a serial killer of other women. Now, over 30 years later, she has published her memoir telling the story of her attack, the enduring trauma in her life, and her path to healing and forgiveness.

Julia wrote her book to share what she discovered about sexual violence, how it affects a person, and how to find a way to live with and heal from from trauma so that others whose lives has been marred by sexual violence might also find a way to heal. She recently answered questions for Rose City Reader.

The River and the Sea: A Story of Forgiveness by Julia Laughlin


How did you come to write The River and the Sea?

Soon after the attack happened I knew I had to write this story—a story of healing from sexual violence, or from rape as I called it then. It wasn’t even a thought so much as this was something I had to do. The idea came to me; I didn’t seek it out. I was already writing about my experiences, I had journaled for years and wrote short stories, so in that sense it wasn’t a foreign idea. But I felt compelled from the beginning to share this story, to write a book about healing from sexual violence to share my experiences to help others heal. Though it never occurred to me that I had no idea what healing was nor what that healing for me would entail.

So the first book I wrote, I knew as soon as it was finished it was not the book I intended to write, a book on healing. It told the story of the two years it took to prosecute him for the rape. I suppose I had to tell that story first. It was cathartic. It was the next layer, of release and facing all that raw emotion and anger of not only going through the experience but then having to fight it through the justice system. That in and of itself was horrendous.

Your memoir is an intensely personal account of being raped and tortured and your struggle to heal from that trauma. Was it difficult to tell such an intimate story?

Yes, it was extraordinarily difficult. I am an intensely private person; I prefer to be in the shadow than in the light. Though it was always my intention to write this story and publish the book, I had to write it as if no one was ever going to read it, otherwise I would have censored my writing. There had always been this internal back and forth struggle about having to write this story and my desire to not ever tell a soul. But during the time I was working with the editors and the designer, when the book was becoming a reality, the struggle intensified and at times nearly crippling me emotionally, especially when I would read the manuscript again and wish I didn’t have to include some particular part.

People who are victims and survivors of sexual violence who are struggling to heal, and family and friends of victims who want to understand. My hope is that in sharing my story of healing, it will help others to find their way out of their torment, finding a path to move forward, and to help others feel less alone. It is also to give voice to what this type of violence does to a person, by naming it, putting light on it, and ending our silence. Healing is possible, a return to wholeness is possible.

But it is also for those who have not had any experience of violence. We need to open a dialogue, a discussion of how violence affects a person and all those around them, the ripple effect it has in our communities. All forms of violence and sexual violence in particular affect all of us in ways we haven’t even begun to calculate.

That producing a book is a long process, there is a lot of hurry up and wait. It was excruciating and frustrating to watch my deadlines fall by the wayside one after another. When I began working with the editor, I expected to have a finished book in six months, nearly two years later I was finally holding that book in my hand. It was a full time job (in addition to my full time paying job). It was consuming and it took over my life; I cut everything out that didn’t support the book. The writing itself takes time and then working with others means their schedules are not necessarily aligned to yours. After all, I was only working on this book while I was only one of many authors they were working for. I am not a patient person, and publishing a book is an exercise in patience.

Some of the most moving insights you share have to do with your relationship with your daughter and how your trauma affected her. How did you come to that realization?

That is a difficult question to summarize in a few words. I have always been open and honest with my daughter. And I have seen with painful truth the difficulty for her of having this mother who was shattered. So I think it comes from not denying how I treated her, and being willing to see clearly and honestly that I was hard on her or that she was affected by my crippling trust issues. It was also listening to her, supporting her in her efforts to come to terms with this. Probably the most important lesson my daughter taught me was about perception. Perception matters in everything, and it was her perception that mattered, not how I thought I was coming across. From this I began learning to see from her point of view. That was a huge shift in understanding and growth, because my interpretation of interactions was fairly skewed.

Don’t blame. Nothing the victim did caused this to happen. Not expect someone to “just get over it” or “move on”. Try to understand how deep this trauma runs, spreading into every aspect of their lives, and what it takes from a person. How it causes them to view the world differently, and how it affects their ability to trust, and be present in the world. Recovery and healing aren’t on our timeline, they are not linear, it is a process, a journey without a destination. What they are doing is learning how to live with the trauma so it no longer poisons their life, but what happened doesn’t go away, you cannot make it not to have happened. And most importantly, believe them, don’t judge, or question their story; be there for them and offer them unconditional love.

Seek help, whether through individual counseling or support groups. Seek outside help from sources that have an honest and in-depth understanding of sexual violence. Just because a professional has worked with victims of sexual violence doesn’t mean they truly understand. Not all the professionals I sought services with did, despite having worked with victims. The same for their family and friends – seek help; and also read others experiences and educate themselves on how this invasion of a person’s self affects the victim and those around them. When we learn this has happened to others, and others have felt this way too, it helps us to feel less alone and lessens the feeling of being an outcast. It removes the isolation. The most important words I can offer a victim is: forgive yourself; love yourself.

What is some of the most valuable advice you’ve been given as someone working to heal from rape?

There are two pieces of wisdom that I have carried with me. The first was when the second assistant district attorney assigned to the case told me, “Courage—it doesn’t mean you are not afraid; it is being afraid and doing it anyway.” It lifted a huge weight off my shoulders, it gave me the freedom to be afraid while I was sticking with the case to prosecute him, even though I was afraid he would come after me, and I had no guarantee of the outcome of the case.

The second was what my therapist taught me about living with the trauma while I was struggling through the fallout, “Life is about the small moments and then we string them together.” It taught me to quit looking for and expecting some big moment, or epiphany and then I would be fixed and everything would be normal. It opened the door to letting go of the expectation of a “cure” and accepting that there is no making it go away.

In addition to writing your memoir, have you found other ways to help you heal from your experience?

What I came to understand about healing, is that there is no one way to reach it, no one moment when I realized I had healed; nothing fixed as “this is the way.” It was changing my thinking more than anything else, my perspective, in doing that I was able to reach forgiveness. Forgiveness allowed me to detach, let it go and let him go, opening the way to healing.

On the day to day it was as my therapist taught me, “First we start with the dishes,” meaning you do one thing at a time and that leads to the next, and so on. It is a way to make it through those difficult days when you can barely get out of bed. What I did along the way though were things such as journaling, playing my guitar, listening to music, walking and hiking with my dogs, running and the other physical training. And I sought professional help, without that I wouldn’t have made it.

What’s next? Are you working on new projects?

The first book I wrote that tells the story of the two years to prosecute the perpetrator. It is written but now I need to begin work with an editor. It is a solid draft, but needs to be flushed out, though it will not take nearly as long nor be as arduous as The River and the Sea. Also, I have plans to begin a third book in this series that recounts the years I worked with the therapist; I have lots of notes and material, but haven’t started it yet. In addition, while working on the current book I began work on a history of sorts of our current attitude and belief in the system of punishment and retribution as justice. I think it is time to accept that our current system no longer works.

THE RIVER AND THE SEA IS AVAILABLE ON LINE FROM LAUGHLIN DAUGHTERS PUBLISHING HOUSE, OR ASK YOUR LOCAL BOOK STORE TO ORDER IT.