To many, a squirrel is a squirrel and by any other name is still just a squirrel. . . .  They are also capable of ravaging birdfeeders worse than jays,  though their brilliant acrobatics to defeat "squirrel-proof" feeders are surely worth the price of a bag or two of the best black sunflower seeds.

-- from "Squirrel Tales" in The Tangled Bank: Writings from Orion by Robert Michael Pyle, published by OSU Press.

Charles Darwin contended that the elements of a tangled bank are endlessly interesting, ever evolving, and can explain the entire living world.  These essays were originally published in Pyle's monthly column for Orion and Orion Afield magazines.  They cover topics from Mexican monarchs to bookstores to the love of hops.

I love that the author's back-cover biography says, "He is often associated with butterflies, slugs, and Bigfoot." That is priceless! Especially when accompanied by a photo of Pyle in a moss coat: 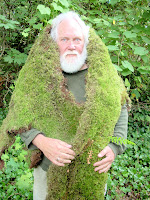 For those in the Portland area, there is a book event for Pyle this Sunday: A conversation, reading, and book launch with Robert Michael Pyle and Orion editor Jennifer Sahn.  Sunday September 30, 7:30 pm Heron Hall, Portland Audubon, 5151 NW Cornell Road, Portland, OR.