Stephen Kurkjian is an acclaimed investigative reporter who wrote for The Boston Globe for 40 years. He was a founding member of the Globe's Spotlight Team that covered the Catholic Church sex abuse scandal, the blockbuster subject of the 2016 Best Picture Oscar-winner Spotlight.

He has now written a non-fiction book on the still unsolved art theft from the the Isabella Stewart Gardner Museum in Boston, Master Thieves: The Boston Gangsters Who Pulled Off the World's Greatest Art Heist

How did you come to write Master Thieves?

I had covered the Gardner investigation for The Globe for nearly a decade before my retirement in 2007, and I decided at some point in the next year or two to write a book on the theft. For a city that has had multiple political and criminal major stories, including the clergy abuse scandal and notorious criminal Whitey Bulger’s secret ties to the FBI, it remains Boston’s best secret - what happened to the masterpieces stolen from the Isabella Stewart Gardner Museum in 1990.

What is your professional background and how did it lead you to writing a book about art theft?

I was an investigative reporter and editor for The Boston Globe for much of my 40-career at the paper. I have a legal background, having graduated from Suffolk University Law School and passed the Massachusetts Bar examination in 1971.

The 1990 art theft from the Isabella Stewart Gardner Museum in Boston is the most infamous unsolved art crime in the world. How did you first become involved in this story?

I was in Washington as the chief of The Globe’s Washington Bureau when the theft took place in 1990 so I was not directly involved in the coverage until I returned a year later. Like everyone else, I thought that the FBI would quickly solve the crime and gain a recovery of the artwork, especially after the museum announced the offer of a $1 million reward. But after several years of no breakthrough, I began asking questions and when The Boston Herald began reporting in 1997 that it had a source who had given them access to the stolen Rembrandt seascape - Storm on the Sea of Galilee - The Globe assigned me to the case. I finally convinced the museum to assist in my investigative work and that assistance propelled me to write piece for The Boston Sunday Globe in 2005, on the 15th anniversary of the theft, about how the heist had taken place. 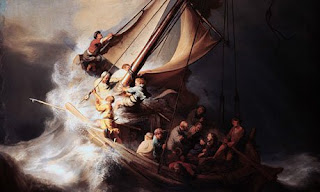 This crime has been the subject of at least two documentaries, as well as several non-fiction and fiction books. What new information or fresh perspective do you bring to the material?

My book provides a comprehensive examination - and in-depth analysis - of those whom the FBI believe were involved in the theft and the stashing of the artwork. It interviews several of the key figures including the principal whom the FBI believes wound up with the artwork - and provides in compelling detail the pieces of information that support the FBI’s attention as well as those pieces that contradict it. In its review The New York Times praised the book as an “impressive attempt to solve the crime by reconsidering the evidence.” Beyond showing who within Boston’s gangs knew of the vulnerability of the museum to a heist, my reporting provides what is sorely-missing from the FBI’s view of the crime: a motive.

What is it about this story that so captivates people?

I think the size of the robbery - the largest in world history and that it involves artistic masterpieces, which can be regarded as mankind’s most brilliant achievements. Also, that it has remained a mystery for so long - 26 years and counting on March 22, 2016, and that nothing has been recovered, no one arrested and, as the FBI told me, not a single “proof of life” sighting of any of the 13 stolen pieces since the robbery, all add to its allure.

You’ve been a journalist for years, even winning several Pulitzer Prizes, including one for your work on The Boston Globe’s Spotlight team’s coverage of the Boston Archdiocese sex abuse scandal. How was writing a book different from writing articles?

I knew that this story needed a final chapter which was going to be impossible for me to write - a definitive account with proof of what had happened to the paintings. Short of a recovery, I knew I had to provide a convincing narrative account of who was involved in the theft, how had they been able to carry it off and why did the crime remain unsolved and masterpieces unrecovered. I knew the book had to be interesting as well as revelatory and I think that high goal has been met by both the quality of the new detail that I reveal as well as the richness of the characters - both rogue and heroic - whom I introduce in Master Thieves.

It’s not enough to shock/surprise the reader to gain their attention as can be done with a newspaper article. A book needs to be “interesting,” which demands the actions/factual material be woven with motivation, perspective, analysis and good writing.

Mostly historical non-fiction. I am currently reading 33 Men - a terrific book on the Chilean mine disaster.

You have a terrific website and facebook page and are also on twitter. But your book is getting terrific buzz from traditional sources like write-ups in The New York Times and The Boston Globe, and you have a calendar full of upcoming events. For promoting your first book, do you find you prefer the computerized interaction of social media, or the old-style book reviews and book tours?

I believe it takes both. I have given more than 100 talks in the past year - a friend says my tour has been longer than Bob Dylan’s - but I augment each one with an announcement on my Facebook page plus photos afterwards.

What is the most valuable advice you’ve been given as a journalist?

Approach every person you are trying to interview with respect but firmness. If they are reluctant to be interviewed, knock on their doors at home and their office. Approach them with civility, and try as directly as possible to explain to them why the information they have is relevant/vital to the article you are researching. And even if they are going to cast as negatively in your article, tell them you are willing to provide them with the documentation on which you are basing your judgement. Never depend on blind quotes to take away a person’s reputation. As my maternal grandmother long ago told her grandkids, lose you arm before you lose you name.

What is the most valuable advice you’ve been given as a book author?

Hemingway wrote that being a reporter can make a person a better writer - if they quit in time! I spent 40 years in the newspaper business before writing a book, and I found I had a lot of relearning to do! Write every day, both creatively and factually. I give people who believe reporting to be a glamorous career this assignment - cover five different local events in a week’s time (no sports or music stories - court hearings, business announcements, municipal events etc. - research the topic beforehand so you can ask questions of the speakers presenting the information, and then go home every night and write 800 words on the event. It’s a dive in the deep end of the pool to determine if you’ve got the basic intelligence, interest, curiosity and writing skills to work as a general assignment reporter.

You get up close and get to ask questions of those who believe they have all the answers. You are expected to question authority every day yet still be viewed as a valued member of the community. You can choose issues to write about the impact so many people in their core interests - health, environment, public safety, jobs and good government. Dig in and be committed to making a difference - for your community, for your newspaper, for yourself.

I came to understand and value my Armenian heritage late in my life - on a trek with my father back to his birthplace in eastern Turkey, which he had to flee as a three-year old in the midst of the Armenian Genocide. I would like to write something memorable that would convey the horrific sadness of that event which took the lives of my grandfather and more than a million other Armenians as well as the heroic story of the survivors.

MASTER THIEVES IS AVAILABLE ON-LINE, OR ASK YOUR LOCAL BOOKSTORE TO ORDER IT!

Want to know more? I recently interviewed Steve on my work blog about the Boston Archdiocese sex abuse scandal, the news coverage of the story, and working on The Boston Globe's Spotlight team.