I Meant to Tell You by Fran Hawthorne -- BOOK REVIEW 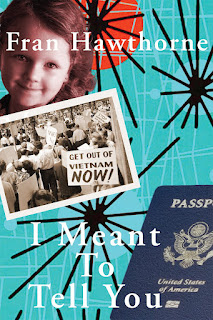 I Meant to Tell You by Fran Hawthorne

Fran Hawthorne's new novel, I Meant to Tell You, starts with the disclosure of a little secret and follows the ripple effects of that disclosure back through years and relationships.

Miranda and Russ are engaged to be married and Russ is ready to start a new job in the U.S. Attorney's office. As part of a routine FBI background check, both must disclose any criminal history. Miranda had never told Russ that years earlier, she tried to help a friend and her child leave the US for Israel during her friend's nasty divorce. Although Miranda did not know this trip was illegal, is was, and she and her friend were arrested at the airport. Miranda was sentenced for a misdemeanor, which was later expunged. Because the conviction was not on her record, she didn't mention it to Russ or the FBI. Big mistake.

The story unspools from there. Other family and marital secrets come to light. The characters wrestle with the ethical dilemmas created by balancing secrecy and honesty. Hawthorne narrates the book through the multiple voices of those involved. The story remains upbeat and it is a fairly quick read, but provides food for thought. It would be a terrific book club pick.

I Meant to Tell You launched this month, in time for holiday gift giving. It is Fran Hawthorne's second novel after her 2018 debut, The Heirs.