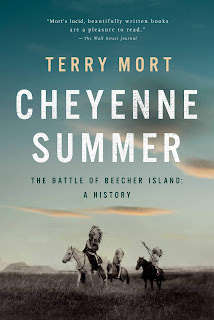 BOOK REVIEW
Cheyenne Summer: The Battle of Beecher Island: A History by Terry Mort (2021, Pegasus Books)
In Cheyenne Summer, Terry Mort takes a close look at one battle in eastern Colorado during the Indian Wars of the late 1800s. In the Battle of Beecher Island in 1868, Cheyenne and Sioux warriors fought US Army scouts, including two battalions of Black "Buffalo Soldiers."

I’m not a big fan of military history. So I appreciated that the bulk of Mort’s 270-page book was not spent describing the actual Battle of Beecher Island. Most of the book provides context for the battle. The first third or more is a detailed account of the Cheyenne, their history, culture, and nomadic tradition. The next third is a brief history of the U.S. Army and civilian settlers during the period of the Mexican-American War, the Civil War, and western expansion. This was a perfect introduction for a reader like me to the various players in the Indian Wars, with their conflicting desires and goals.

Having grown up at both ends of the Oregon Trail -- Nebraska as a child and Oregon from a teenager on -- I've picked up some of the sad history of how our country treated the Native Americans during the settlement of the Western frontier. But there is a lot to learn. Terry Mort’s new book was a fine place for me to start.


FROM THE PUBLISHER’S DESCRIPTION

Evoking the spirit—and danger—of the early American West, this is the story of the Battle of Beecher Island, pitting an outnumbered United States Army patrol against six hundred Native warriors, where heroism on both sides of the conflict captures the vital themes at play on the American frontier.

Although the battle of Beecher Island was a small incident in the history of western conflict, the story brings together all of the important elements of the Western frontier—most notably the political and economic factors that led to the clash with the Natives and the cultural imperatives that motivated the Cheyenne, the white settlers, and the regular soldiers, both white and black. More fundamentally, it is a story of human heroism exhibited by warriors on both sides of the dramatic conflict.

NOTES
Read the opening sentence and a teaser from Cheyenne Summer here.