June Wrap Up - My June Books 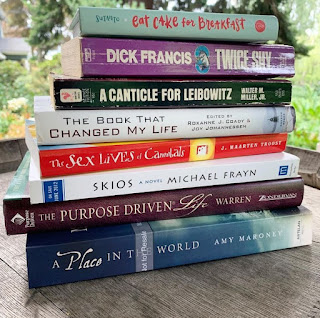 JUNE WRAP UP
My June reading was a real mishmash! I read book from the lists I'm working on, challenges for 2021, things that caught my eye, and just at random.
Here are the ten books I read in June, in the order I read them, not as they appear in the picture.

A Canticle for Leibowitz by Walter M. Miller, Jr., a sci-fi classic. I enjoyed it more than I thought I would, but I’m still not a sci-fi fan. This is one of the 50 books on my Classics Club list. 🌹🌹🌹🌹
Skios by Michael Frayn was a reread for me, for my book club’s first post-corona in-person get-together. This Greek island farce was just as fun the second time. 🌹🌹🌹🌹🌹
The Purpose Driven Life: What on Earth am I Here For? by Rick Warren. This has been on my TBR shelf forever and I am glad I finally read it. 🌹🌹🌹🌹🌹
The Sex Lives of Cannibals by J. Martin Troost, a hilarious memoir and one of the best titles ever. He wrote two more memoirs about his expatriate adventures and now I want to finish the trilogy. 🌹🌹🌹🌹🌹
The Book That Changed My Life: 71 Remarkable Writers Celebrate the Books That Matter Most to Them by Roxanne J. Coady and Joy Johannessen. I love books about books, so this was right up my alley. 🌹🌹🌹🌹
The Conservative Sensibility by George F. Will - not pictured because I read it with my ears. Will's new history of American conservative thought I mostly found interesting although it got very long. He included an endless chapter on his own atheism and why conservatism doesn't depend on a belief in God. I agree you don't have to be a believer to be conservative, but I don't think the argument needed the long digression he gave it, especially when he got down in the weeds about Charles Darwin. 🌹🌹🌹🌹

Eat Cake for Breakfast: And 99 Other Small Acts of Happiness by Viola Sutanto. This adorable new book is filled with happy illustrations. I needed a light spacer after Will's tome. 🌹🌹🌹🌹
A Place in the World by Amy Marone is the final book her Miramonde series and first-rate historical fiction. Read my interview with Amy Marone here. Her new series launches in September with the first book, Island of Gold, and it looks terrific! 🌹🌹🌹🌹🌹
Busman’s Honeymoon by Dorothy L. Sayers, another audiobook, so not in the picture. This is the final novel in her Lord Peter Wimsey mystery series. I made an effort to finish the novels in the the series this year and have only the short stories to read. I have an omnibus edition of those and hope to finish them before the end of the year but don't know if I will get to them. 🌹🌹🌹🌹🌹

Twice Shy by Dick Francis, another horse-themed mystery, this one with a startlingly dated computer theme. Anyone remember learning to code Basic? 🌹🌹🌹🌹