January Wrap Up - My January Books 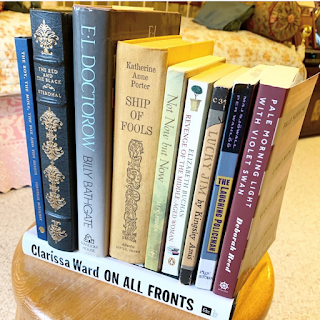 JANUARY WRAP UP
One of my bookish New Year's resolutions was to try to post monthly wrap ups of the books I read each month. I haven't done this in the past because I read so many books with my ears that I don't have book books to photograph. I also often give books away right when I finish reading them so don't have a complete stack to take a picture of at the end of the month.

Because I made this resolution -- let's call it an intention, it's less than a resolution -- I did two things. First, I remembered to keep the books I finished reading until the end of the month so I could take a picture of them. Important.

Second, I concentrated my audiobook selection on books that were already on my TBR shelves. This might sound silly to you. Why chose an audiobook when the perfectly good paper book is sitting right there, waiting to be read? I'll tell you. Because some of those books have been sitting on my TBR shelves for years - years! According to LibraryThing, there are over 1,700 physical books on my groaning TBR shelves. It could be many more years before I get to any particular book. So I decided to start reading some of them with my ears and clearing off those shelves just a tiny bit faster.

The result is that I managed to knock nine books off my TBR shelves, reread an old favorite, read one new one for book club, and still get in two audiobooks not otherwise on my shelves.

My January books, in the order I read them, not the order in this picture, were:

The Boy, the Mole, the Fox and the Horse by Charlie Mackesy. A friend gave this to me and I read it on New Year's Day. It is charming and I understand its popularity. 🌹🌹🌹🌹🌹

Lucky Jim by Kinglsey Amis made me appreciate this old favorite even more than when I first read it in college. 🌹🌹🌹🌹🌹

The Red and the Black by Stendhal. This was a clunker for me. I found the hero, Julien Sorel, unbearable. 🌹🌹

Billy Bathgate by E. L. Doctorow. I'm not much of a Doctorow fan and was surprised how much I enjoyed this one. 🌹🌹🌹🌹

Now Now, But NOW by M. F. K. Fisher. This is Fisher's only novel. I read it for book club. It's an odd book, really four short stories about the same character, set in four different times and places, so connected by time travel. It was like Orlando, written by Colette, commissioned by Gourmet magazine. I'm glad I read it but I prefer her nonfiction. 🌹🌹🌹

Ship of Fools by Katherine Anne Porter. This is on the Erica Jong list of Top 100 20th Century Novels by Women and on my Classics Club list. 🌹🌹🌹🌹

The Great Divorce by C. S. Lewis. This is one of the audiobooks I read that isn't pictured. Another bookish resolution of mine is to read several C. S. Lewis books this year. 🌹🌹🌹🌹

The Abolition of Man by C. S. Lewis. Another audiobook. 🌹🌹🌹🌹

Revenge of the Middle-Aged Woman by Elizabeth Buchan. This was a nice surprise. It was much better, with a lot more heft to it, than the cover and description led me to expect. 🌹🌹🌹🌹🌹

The Time Machine by H. G. Wells. I've been meaning to read this classic sci-fi forever and am glad I finally did. I didn't love it like I loved War of the Worlds, but it was still very good. 🌹🌹🌹🌹

The Laughing Policeman by Maj Sjöwall and Per Wahlöö. This early police procedural didn’t engage me, even though it won the Edgar Award for best mystery. It felt like a prototype compared to more recent versions of Nordic Noir like Jo Nesbo’s books. And the female characters were absurd – “nymphomaniacs,” shrews, or dipsos. 🌹🌹

On All Fronts: The Education of a Journalist by Clarissa Ward. I just finished this gripping memoir about being a war correspondent. Can’t wait to discuss it at book club! 🌹🌹🌹🌹

I usually only read eight, maybe nine, books in a month. I don't know why I finished 13 in January. We will see what February has in store.

What was your favorite January read? What books are you looking forward to in February?


Posted by Gilion at Rose City Reader at 9:00 AM 5 comments