February Wrap Up -- My February Books 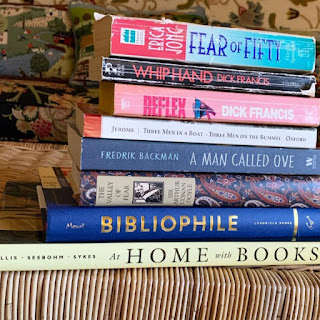 FEBRUARY WRAP UP
Um, March is speeding along, almost over, and I just realized I forgot to post my February wrap up post! This is why I skipped bookish New Year's resolutions in the past -- just like all New Year's resolutions, they never last longer than a month.
But it takes repetition to create a new habit. So I am posting now, several weeks late. My intention is to post my March wrap up post in a timely manner and try to get in the habit of posting a wrap up post of the prior month's reads early each month. Baby steps.
In February, I continued my plan to try to choose as audiobooks (which I borrow from the library for the most part) those books already on my TBR shelf. It may seem silly to borrow a book I already own, but there are so many books on my TBR shelves it will take me at least 15 years to read them all at the rate I'm going. I need to speed things up and borrowing the audiobook edition from the library is my plan for doing it.
I'm also trying to finish, or at least work on, some of the mystery series I've started. And I'm trying to read at least one coffee table book each month to justify my ever-expanding collection of these oversized beauties.
Here are the 13 books I read in February, in the order I read them, not the order in the picture.
MY FEBRUARY BOOKS
A Man Called Ove by Fredrik Backman. I was slow to get on the Backman bandwagon, but I’m all on now. 🌹🌹🌹🌹🌹
The Nine Tailors by Dorothy L. Sayers, a Lord Peter Wimsey mystery and highlight of the month. I read this one with my ears and it is one of the few in the series I do not own in a paper edition. I am close to finishing the series and hope to do so this year. 🌹🌹🌹🌹🌹
Murder in the Bastille by Cara Black, who does for Paris what Donna Leon does for Venice. This was another audiobook not on my TBR shelf. I own several from later in the series and want to fill in so I can read them. 🌹🌹🌹🌹
Reflex by Dick Francis. I love his horse-racing themed mysteries. I read this one with my ears although I had a beat up paperback as you can see in the picture. 🌹🌹🌹🌹
At Home with Books: How Booklovers Live with and Care for their Libraries by Estelle Ellis, Caroline Seebohm, and Christopher Simon Sykes. A gorgeous coffee table book with useful information and lots of inspiration. 🌹🌹🌹🌹
Fear of Fifty by Erica Jong. I meant to read this, her midlife memoir, when I turned 50 and finally got to it now for my 55th birthday last month. 🌹🌹🌹🌹🌹
Shuggie Bain by Douglas Stuart, the one new book I read last month. I read it because it won the Booker Prize. I could have done with 100 times more Shuggie and one tenth of Agnes. Grim. 🌹🌹🌹
Whip Hand, also by Dick Francis, which won the Edgar Award for best mystery in 1980. I read the three Sid Halley books out of order (3, 1, 2) and they were all great, but I wish I had read them in order. 🌹🌹🌹🌹
Three Men in a Boat by Jerome K. Jerome, which was a reread for me and I loved it even more this time around. It is so funny! 🌹🌹🌹🌹🌹
The Valley of Fear by Arthur Conan Doyle, the fourth and final Sherlock Holmes novel. It was very good! I set out to read all the Sherlock Holmes books in order. I still have two books of short stories to get through and then I’ll be finished. 🌹🌹🌹🌹

Three Men on the Bummel, also by Jerome K. Jerome. Also really funny, especially his descriptions of Germans liking to tidy up their forests – so true! He wrote it in 1900 and we tease our German cousins today about tidying the forests. 🌹🌹🌹🌹
Bibliophile: An Illustrated Miscellany by Jane Mount. This was beautiful and entertaining – and greatly expanded my wish list. 🌹🌹🌹🌹
Homage to Catalonia by George Orwell, which I’m glad I finally read. I don’t understand the Spanish Civil War any better than before, but at least I understand why I don’t understand it. This will be my Spain book for the 2021 European Reading Challenge. 🌹🌹🌹🌹 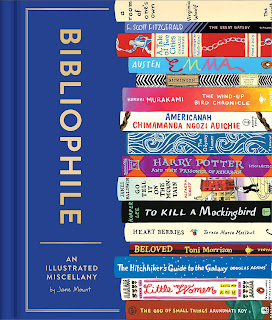 The prettiest cover of the month!