Ilse van der Merwe is a self-taught cook, culinary enthusiast, blogger, and food writer. She has been blogging about cooking, food, and entertaining on her blog, The Food Fox, since 2011. She wanted to write a book about Cape Mediterranean food and cooking to document the contemporary style of cooking popular in the Western Cape. She describes Cape Mediterranean food as "a hybrid cuisine strongly influenced by the broader Mediterranean basin," although with more meat and dairy.

Her new cookbook, Cape Mediterranean: The Way We Love to Eat includes more than 75 tasty recipes, well-illustrated with beautiful photographs, that cover everything from bread and appetizers to fish and roasts, vegetable dishes and pastas, and several lovely desserts. It is a "Pan-Mediterranean" collection, with recipes as diverse as a classic chicken liver pate with brandy to harissa paste, arancini with smoked mozzarella to split pea soup with smoked pork, Greek-style youvetsi (a lamb casserole) to preserved lemons.

The collection skews Italian, and maybe a little more northern Italian than what some would think of as typically Mediterranean, with plenty of cheese and cream. But there are, overall, more than enough vegetable dishes and lashings of olive oil to round out the compilation. None of the recipes are terribly difficult and van der Merwe gives clear instructions. The one tricky bit is that temperatures have not been converted from Celsius to Fahrenheit.

All in all, Cape Mediterranean is an enticing cookbook for American home cooks curious about how people cook and eat in Cape Town, or looking for a new, one-stop collection of popular, tasty dishes.

WEEKEND COOKING
Hosted by Adventures of an Intrepid Reader 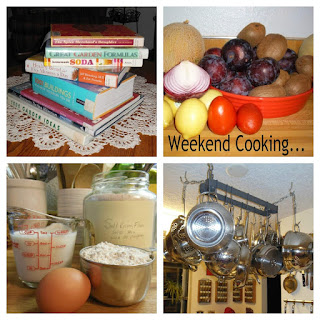 Weekend Cooking is a weekly blog event where book bloggers have been sharing food-related posts on the weekends since 2009, when Beth Fish Reads started the event. Marg at The Adventures of an Intrepid Reader took over hosting duties from Beth this weekend.

Thank you Beth for hosting for so long! And thank you Marg for taking over! Ever since I started my own law firm, I haven't had the time I would like for book blogging, including this fun event that I always enjoyed. One upside of sheltering in place is I have a little more time to blog.

Posted by Gilion at Rose City Reader at 9:00 AM 13 comments