THANKS FOR JOINING ME ON FRIDAYS FOR BOOK BEGINNING FUN!

This day got away from me!  Please leave your link in a comment. I can't get Mr. Linky to. Work on my phone because I can't remember my password. 😝

Please join me every Friday to share the first sentence (or so) of the book you are reading, along with your initial thoughts about the sentence, impressions of the book, or anything else the opener inspires. Please remember to include the title of the book and the author’s name.

EARLY BIRDS & SLOWPOKES: This weekly post goes up Thursday evening for those who like to get their posts up and linked early on. But feel free to add a link all week.

FACEBOOK: Rose City Reader has a Facebook page where I post about new and favorite books, book events, and other bookish tidbits, as well as link to blog posts. I'd love a "Like" on the page! You can go to the page here to Like it. I am happy to Like you back if you have a blog or professional Facebook page, so please leave a comment with a link and I will find you.

TWITTER, ETC: If you are on Twitter, Google+, or other social media, please post using the hash tag #BookBeginnings. I try to follow all Book  Beginnings participants on whatever interweb sites you are on, so please let me know if I have missed any and I will catch up.

TIE IN: The Friday 56 hosted by Freda's Voice is a natural tie in with this event and there is a lot of cross over, so many people combine the two. The idea is to post a teaser from page 56 of the book you are reading and share a link to your post. Find details and the Linky for your Friday 56 post on Freda’s Voice.

No book beginning for me this week!

Posted by Gilion at Rose City Reader at 5:52 PM 28 comments

This review of Lost in Translation by Nicole Mones was first posted on April 2, 2008.
Mones is the author of several novels set in China, most recently Night in Shanghai, about African-American jazz musicians leading Shanghai's pre-WWII jazz scene. 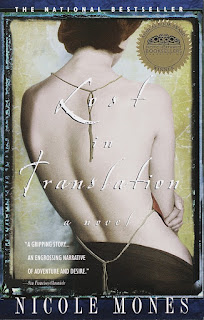 No, not the Scarlett Johansson movie. This Lost in Translation is an imaginative and satisfying novel by Nicole Mones. The protagonist, Alice Mannegan, is an American living in China, working as an interpreter, and striving to be accepted in the culture she has adopted. When hired by a second-rate American anthropologist, the two hook up with his Chinese counterparts and head to Inner Mongolia looking for the lost remains of Peking Man.

Mones does a great job of weaving the histories of the characters into the main story. While the team follows the trail of homo erectus, Alice struggles to understand her relationship with her powerful father; her boss worries about losing his son’s affection and respect; and their Chinese cohort searches on the sly for the wife he cannot abandon although she disappeared to a work camp during the Cultural Revolution. Mones uses the historic relationship between French priest Pierre Teilhard de Chardin and his platonic lover, Lucile Swan, to bring thematic unity to the varied storylines.