Gail Hovey, Author of She Said God Blessed Us: A Life Marked by Childhood Sexual Abuse in the Church - AUTHOR INTERVIEW 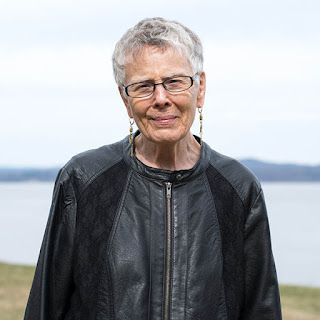 AUTHOR INTERVIEW: GAIL HOVEY
When Gail Hovey was a teenager, she was emotionally and physically seduced by Georgia, the education director at her church. It took her decades, including a move to South Africa, to break free of Georgia's influence. In her new memoir, She Said God Blessed Us, Hovey tells her story with compassion and insight. It is a memoir worth reading for anyone whose family has been touched by abuse or who wants to understand dynamics and effects of abuse. 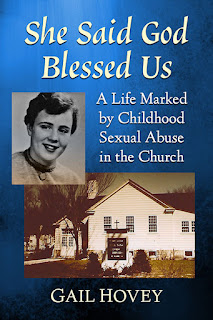 She Said God Blessed Us: A Life Marked by Childhood Sexual Abuse in the Church by Gail Hovey (2020, Exposit Books)
Gail talked with Rose City Reader about writing memoir, books that inspire her, and more:

How did you come to write your new memoir She Said God Blessed Us?

I’ve been trying to write this story for more than 40 years. I tried and failed and tried and failed and tried again. The story, which of course kept developing, would leave me alone for years at a time, but never go away. News of sexual abuse in the Catholic Church began to emerge in the 1990s and beyond, and those stories provoked me. Dharma talks at a Zen retreat in 2005 included descriptions of desirable qualities in a religious teacher and reminded us of the power of first love. Hearing these talks wrapped me in unexpected sadness. My first religious teacher and my first love were the same person. That’s not how it’s supposed to be. I knew at that moment that I had to write my story as a memoir.

Your memoir is a deeply personal account of your intimate relationship with Georgia, the education director of your childhood church. Was it difficult to tell such a private story?

Once, sitting on a New York subway train, in the midst of some writing or relational crisis, I looked around. I remember saying to myself, “Everybody does it. What’s the big deal?” I meant that the elegant white woman across the aisle from me, and the hip young Black man, and the elderly Chinese couple next to him, they all had sex. We all had sex. What’s the big deal? It helped me to think that I was writing my version of an almost universal human experience.

Writing the memoir in my seventies didn’t make the difficulties of telling a very private story go away, but the most painful chapters happened a good long time ago. That helped. I was also supported by a community of women and by a partner who believed in the importance of my project. By this time in my life, not writing would have been far more difficult.

Did you consider turning your experience into fiction and writing the book as a novel?

I did write my story as fiction, in three different versions, with three different agents over fifteen years. None of these novels found a publisher. My last agent told me, in the late eighties, that the novel was too straight for the gay market and too gay for the straight market. True or not, what I appreciate now is that I had yet to take in the full impact of what had happened to me. Only after more lived life could I see that my relationship with my religious teacher, beginning when I was a teenager, had multiple dimensions -- physical, intellectual, and spiritual. The novels had hidden as much as they had revealed. I was ready to stop hiding and write the story as memoir.

What did you learn from writing your book – either about the experiences you describe or the
writing process – that most surprised you?

Writing memoir, my public life is present as context and playing field for the unfolding of my very private life. That public life—writing and activism that began with the civil rights movement and grew to include solidarity work with people’s movements from southern Africa to Hawaii—I chose that life for reasons very connected to my private story. Twining these two together and making the personal public, I am whole and honest in the world for the first time. This was the biggest surprise.

Can you recommend any other memoirs that deal with sexual exploitation in a church setting,
especially of women, with the honesty and forgiveness you put into yours?

I know of no other book, memoir or novel, that tells the story of a religious woman who abused children. I know of no other memoir that addresses the life-long consequences of childhood sexual abuse. The valuable books I’ve read about sexual abuse in the church are all written by men. Martin Moran’s The Tricky Part: A Boy’s Story of Sexual Trespass, a Man's Journey to Forgiveness is the only memoir. The rest are novels or short stories: Anthony Wallace, The Old Priest; Andrew O’Hagan, Be Near Me; Thomas Keneally, Crimes of the Father. My memoir takes place within the Protestant church community. The books mentioned here are all within the Roman Catholic community.

Because of my long involvement with southern Africa and the struggle against colonialism, I read many books related to Africa. I have just completed Maaza Mengiste’s The Shadow King, a novel of the 1935 Italian invasion of Ethiopia. Two others I admire greatly are Hisham Matar’s The Return: Fathers, Sons and the Land in Between, and Jenny Erpenbeck’s Go, Went, Gone.

I have also just completed Robert Jones, Jr.s’ novel The Prophets. Two enslaved young men on a plantation in the deep South before the Civil War who form a forbidden union.

Robert Jones has quoted Toni Morrison: If you don’t find the book you need, write it. Jones has written a story we need, men who loved each other, even under slavery. Morrison’s quote encouraged me too, a long time ago. I wrote the book I needed. Morrison’s novels, her essays, her presence during my lifetime inspired, amused, humbled, and changed me, over decades.

James Baldwin was writing his novels and essays when I was a young woman, and like Morrison, he taught me.

Adrienne Rich is the poet who gave me the language I needed to begin to understand my life.

Publishing a book in the midst of a pandemic and a fraught political season is not something I would ever recommend! During the lockdown, I’ve been grateful for the book groups that have Zoomed with me, the readings I’ve given and the interviews I’ve had. These are available on my website. I look forward to the opening of opportunities: reading in bookstores, presenting my work in seminary and college classes, discussing my memoir with book clubs. My promotional work now is reaching out to begin to schedule such events.

In 2017, I was invited to return to Hawaii, where I lived for fifteen years—years skipped in my memoir, as they tell a different story. In Hawaii, I worked for Native Hawaiian community organizations, especially Ka’ala Farm / Cultural Learning Center. To honor its 40th anniversary, Ka’ala’s story needed to be told: how its founders discovered ancient archeological sites, returned the land to the production of native plants, and gathered people, especially children, to teach them Hawaiian culture and its importance in the 21st Century. My job was to interview those who led the organization over the decades, from the elders to the youth involved today. Now that my memoir is published, I will return to this project and bring it to completion.
THANK YOU GAIL!
SHE SAID GOD BLESSED US IS AVAILABLE ONLINE.