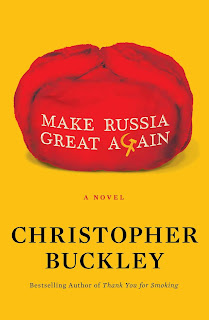 Christopher Buckley took a break from writing satire to write two historic comic novels, The Relic Master and The Judge Hunter. At the time, he said American politics had become “sufficiently self-satirizing” and did not need his help. The Trump Presidency tempted him back and his latest book, Make Russia Great Again, brings us back to Buckley's favorite formats, the faux White House memoir.

MRGA is the "memoir" of Herb Nutterman, former White House chief of staff for Donald Trump, now convicted felon serving his term in a federal penitentiary. He got the chief of staff job after working in Trump hotels for 27 years, most recently as the general manager of the Trump Bloody Run Golf Club in Little Hot Pepper, Virginia.

And with that set up, the story is off and running, as only a Christopher Buckley novel can do. There are plenty of funny names for people doing normal jobs in exaggeratedly funny ways: Senator Squigg Lee Biskitt of South Carolina, chief of communications Greta Fibberson, news pundit Chip Holleran, etc. The play on words continues throughout. The jokes hit today's hot buttons: Civil War statues, cable news talking heads, political nominations, Russian elections, and more.

It takes a while to get to the core of the plot, which is a Russian plan to blackmail Trump and alter the outcome of the U.S. 2020 election. As in any good farce, the plan is convoluted and the goal keeps changing, all to maximum comic effect. Nutterman running interference with a Russian oligarch and Vladimir Putin to fend off an election disaster is funny. The book is spot-on parody, slapstick, silly, and funny.

But what is really clever is the satire at the heart of the plot. Satire has to be audacious to work and the satire here really zings. It involves a Pentagon plan called Placid Reflux to use artificial intelligence to combat Russian interference with US elections. The plan goes too far and gets a member of the Communist party elected to lead Russia (thereby triggering the rest of the story).

Those who dislike Trump will like MRGA more than Trump supporters, although I don't think there's enough red meat in it for those who really can't stand him. It is definitely funny and readers who enjoy Veep will most likely enjoy it, whatever their political leanings.

Read an article with Christopher Buckley about Make Russia Great Again in The Atlantic.