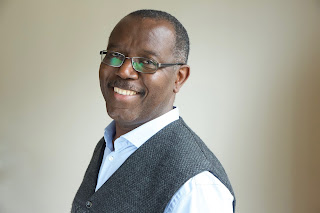 AUTHOR INTERVIEW: LOUIS-PHILIPPE DALEMBERT
The Mediterranean Wall by Louis-Philippe Dalembert, translated by Marjolijn de Jager (2021, Schaffner Press)
Louis-Philippe Dalembert is a prize-winning Haitian poet and novelist, who writes in both French and Haitian creole. He has worked as a teacher and visiting poet at universities in the US, Germany, Switzerland, and (currently) France. He lives in Paris and Port-au-Prince.

Dalembert's latest novel, The Mediterranean Wall, is based on true events of the summer of 2014, off the coast of Italy. It is the story of three women fleeing their homelands -- Nigeria, Somalia, and Syria. They are thrown together aboard a dilapidated refugee boat in the Mediterranean Sea, trying to get to Europe. 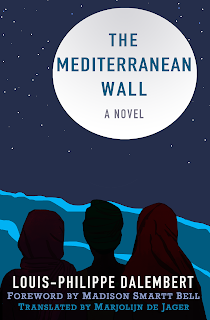 At a very young age, I was confronted with stories of migration. In my family and my circle of friends, I saw many people leave, especially to the United States and Canada. Later, I was the one who left for Europe. I lived in France, in Italy, in Israel. I taught in Switzerland, Germany, the United States. I have traveled to Africa and the entire American continent. When I write a novel about migration, I naturally draw on my own experiences as a migrant. This allowed me to empathize with my characters.

In fact, the refugee crisis in the Mediterranean was just a trigger, there are other parameters to consider. First of all, I have lived a lot in Italy, where the issue of refugees arriving by boat goes back to the 90s. Secondly, I come from a generation of Caribbean people who were marked by the phenomenon of the Haitian and Cuban boat people, trying to reach the coasts of the United States in the 80s. Finally, the drama of people traveling in the holds of overcrowded boats is part of my identity as a black man from the American continent. All of these elements were at the origin of The Mediterranean Wall.

Your story is based on true events. How did you research the historical information and detail found in your book? Did you have access to primary source materials?

To write this novel, I stayed on the island of Lampedusa, Italy, between January and February, 2018. Lampedusa is an island that, since 1992, has received a large flow of migrants from Africa and the Middle East. I also did a lot of research, read hundreds of articles and books, watched dozens of documentaries. The scenes I describe in the novel are nothing compared to the heartbreaking testimonies I read, or collected from refugees during my stay in Lampedusa. I tried to put the same modesty that they use when they finally accept to tell their story. Some scenes are still quite close to reality.

Why did you choose to tell your story from the point of view of three women protagonists? Was it difficult to get inside the heads of your women characters?

When the media reports on the refugee crisis in the Mediterranean, they often show us boats full of men. But half of these refugees are women. Probably fewer of them reach the end of the journey, victims of all kinds of violence along the way. I had no difficulty getting into the shoes of these characters: I was raised by women, having not known my father, who died when I was less than a year old. Moreover, I have a wonderful editor, a woman who is an tremendous reader. That said, this is still a man's novel, a tribute to women and their courage. Where I come from, you don't have to be a woman to be able to talk about women, or a gay man to be able to talk about gay men. You just have to be a human being capable of empathy.

What is your background? How did it lead to writing fiction?

I have always read a lot since I was a child. I don't play any particular instrument, and I am unable to draw. This is a shame coming from a country like Haiti, where music and painting are the most common art forms. As I grew up, it was only natural that I found my favorite mode of expression in the written word. Like many Haitian writers, I entered literature through poetry. I published my first book of poems at the age of 19. I have never stopped since. However, fiction offers me other alternatives: space; the possibility of multiplying points of view, by slipping into the skin of characters sometimes opposite to what I am; without forgetting the absolute necessity, from my point of view, to tell a story. Also, my dual training as a literary scholar - I have a PhD in comparative literature - and as a journalist have taught me to be very careful also about the story to tell.

You put me in difficulty with this question, there are so many. Let's say those who marked my adolescence and my early youth: Dostoevsky, Isaac Bashevis Singer, Philip Roth, Zora Neale Hurston, Gabriel García Márquez. As you can see, there are no poets among them. I started with poetry, and I keep writing and publishing poetry. The first authors I admired were poets.

That said, I hope I'm too old to write under the influence, unless of course it's a conscious game, a kind of dialogue with an author whose work I've admired, as I did with the poet Saint-John Perse in my last collection Cantique du balbutiement.

I'm a bulimic reader, and I read everything: novels, essays, short stories... except when I'm in the middle of writing. In that case, I only read newspapers, comics and poetry.

Before writing my new novel, which comes out next month, I read or re-read many books by authors from the United States: Russell Banks' Continental Drift, which I loved when it came out; Madison Smartt-Bell's trilogy, devoted to the history of Haiti; my compatriot Edwidge Danticat; Toni Morrison's Beloved, the novel I love most by her; Colson Whitehead's Underground Railroad, whom I had the opportunity to meet in France at a literature festival; Chester Himes, who knows how to treat very serious subjects with a lot of humor. . . .

Read, read and read again. Then write, write and write as if your entire life depended on it; without thinking about anything else, neither about a possible publication nor about possible readers.

For now, I've just finished a new novel, Milwaukee Blues, a fresco on racial tensions in the United States, which was inspired by the George Floyd tragedy. It will be published in Paris at the end of next month, by Sabine Wespieser editions.
THANK YOU, LOUIS-PHILLIPE!
THE MEDITERANNEAN WALL IS AVAILABLE ONLINE.