Teaser Tuesday Oregon Two-fer: On Mount Hood and An Architectural Guidebook to Portland 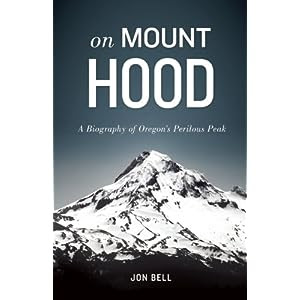 Over the years the mountain has been host to a range of unique climbing feats and stories not readily found on other Cascadian peaks.  In 1894, in response to an advertisement in the newspaper, more than one hundred people climbed to the top of Mount Hood and formed the Mazamas outdoor club.

-- On Mt. Hood: A Biography of Oregon's Perilous Peak by Jon Bell. Another good one from Sasquatch Books. Mount Hood is the highest peak in Oregon and an icon of the state.

It doesn't matter if you've been through the sacraments or not; if you want to see a beautiful spiritual and architectural space, visit [St. Mary's Cathedral]. . . .  The architect chosen for this job was Joseph Jacobberger, the man who oversaw the layout of the University of Portland and executed many church designs in the early 20th century.

-- An Architectural Guidebook to Portland by Bart King, also published by OSU Press.