Review of the Day: My Life in France 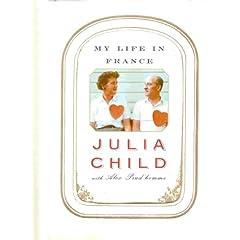 My Life in France is Julia Child’s memoir of her years living in Paris, Marsails, and Provence; her tutelage under French chefs; her “cookery-bookery” with Simone Beck and Louisette Bertholle; and her general love affair with la belle France. Written in collaboration with Alex Prud’homme, the book reads like a chatty letter from an old friend.

Child was in her 30s when she married her husband Paul and they moved to post-war Paris, where he had a job with the United States Information Service. No cook before her wedding, Child’s love of French food led her to enroll at Le Cordon Bleu, the legendary cooking school, which was a little down at the heel after WWII, but still managed to launch America’s most famous chef.

While in Paris, Child hooked up with Beck and Bertholle and the three began work on what eventually was titled Mastering the Art of French Cooking, Vol. I. It took 13 years from original conception to publication in 1961. Child and Beck spent another nine years completing Volume II. In the meantime, the Childs had moved back to America, settling in Cambridge, Massachusetts, and Child had started a cooking show for PBS – quite a creative leap for someone who had not even owned a television set until 1962 or so. They maintained their connections with France by keeping a second home in Provence.

What makes the book so appealing is Child’s exuberance. Even when she wrote the book in her late-80s, shortly before she passed away in 2004, she showed an enthusiasm for food, cooking, and her husband that brings energy to every page.

NOTES
I am posting this review on my birthday (not my blog birthday, my real one) because I love celebrating my birthday and this book is a great party of a book.

There is a gorgeous, boxed edition of both volumes of MTAFC. If I didn't already have both books, that set would be at the tip-top of my wishlist.

Posted by Gilion at Rose City Reader at 6:00 AM 15 comments