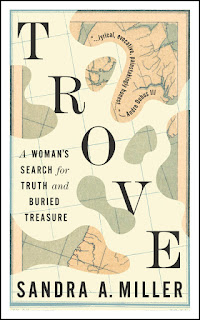 Trove: A Woman's Search for Truth and Buried Treasure by Sandra A. Miller, from Brown Paper Press

As a child, Sandra A. Miller gathered treasure. Stray buttons, pretty stones, even paper clips caught her magpie eye and found their way to her shoebox treasure chests. She carried her scavenger hunting habits into adulthood, finding herself one day, sometime in her forties, digging for pirate treasure in Brooklyn with a sexy man named David.

But Trove is memoir, not fiction. So reality nudges in to explain that the “pirate treasure” was buried by a couple of entrepreneurial puppeteers as a marketing stunt. Miller lives in Boston, a five-hour drive from Brooklyn, where her two kids wonder why their mom is not home with them. And her husband is getting exasperated with her buddy David now that this armchair treasure hunt has turned into an actual road trip. Is she searching for buried treasure or running away?

Miller explores these ideas and how her search for treasure has always been “an instinct born of yearning.” Her parents were volatile, often angry with each other and their two daughters, although always happy and popular with outsiders. Her father died when she was 19, before she felt a connection between them. Now Miller’s elderly mother is reaching her end, having never connected with Miller’s children or shown Miller motherly love.


Maybe it had to do with growing up lonely in a middle-class, Catholic family, being a fiery young girl forced to endure a home life as empty as that hollowed-out tree stump, with no promise of treasure underneath. And maybe that girl grew into a passionate woman who still obsessively believed her only chance for happiness was buried in some unknowable place.

The narrative flows effortlessly with a casual style that is introspective but never maudlin. Just when it was starting to feel exasperating that she didn’t tell her husband exactly what was on her mind, Miller brought her story to a conclusion most satisfyingly, even with a bit of a twist.

All in all, Trove is an excellent memoir. It would make a good book club pick. I would recommend it in particular for sandwich generation readers, women facing middle age, and those dealing with aging parents.

This review will appear in the October 2019 edition of Midwest Book Review.

Posted by Gilion at Rose City Reader at 12:00 PM 2 comments