Indie author Dan T. Cox grew up in Oregon, using his journalism degree for a career in creative advertising. His collection of short stores, A Bigger Piece of Blue, is his first book. 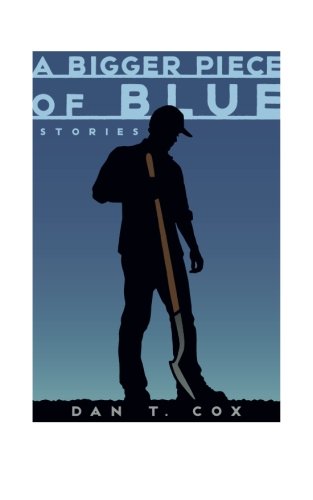 How did you come to write A Bigger Piece of Blue?

The elements of the book have been in the works for nearly two decades. The stories just began flowing back then, often in crude and uncalculated form. It wasn’t so much that I set out to write a story collection along a certain theme. Rather, the stories seemed to cluster together naturally over time. In some instances, I was probably working out a personal problem or challenge by assigning it to a character, or a scenario. In other cases I explored topics or characters simply because they were interesting to me. The notion of an actual book took hold in more recent years. The hard work of re-writing stories until they’re good enough to share took a long time, and was only possible after I had lived long enough for my perspective to crystallize.

What is your work background? How did it lead to you writing a collection of short stories?

I began thinking of myself as writer in the 8th grade, when I realized my aptitude for writing exceeded my aptitude for basketball. That feeling persisted through high school and powered me through college. Dr. Willis L. Winter at the University of Oregon School of Journalism steered me toward a career in advertising on the strength of my knack for writing ad copy, and I’ve remained in that field ever since. The ambition to switch careers from ad man to author has been thrashing around for a long damn time. A Bigger Piece of Blue is the first tangible step in that direction.

I admire the work of so many outstanding authors. Leading the pack for me is John Updike for his short story collection called Pigeon Feathers. Next up is a guy named Hemingway for his posthumous short story collection titled The Nick Adams Stories. And then there is the Pacific Northwest’s own Raymond Carver, arguably the best ever American short story writer, who died too soon. My favorite non-fiction writer is the awesome David Halberstam, who also died too soon. Finally, I am fascinated by the unusual language of Cormac McCarthy, and the grit of Annie Proulx.

Here comes the counterintuitive part of my story as a writer—though I write short format literary fiction, I mostly read nonfiction material. Sure, I was inspired in the early days by the work of a few literary giants and mostly by Updike. But today I favor the work of David Halberstam and those who write (or wrote) with a sort of fierce clarity couched in graceful language. On my nightstand right now are Hamilton by Ron Chernov and The Gathering Storm by Winston Churchill.

You have a great website and are active on Facebook. From an author’s perspective, how important are social networking sites and other internet resources to promote your book?

It was clear from the start of the book marketing effort that it would be easy yet unwise to throw money at this. The first and best avenue for book promotion is to take full advantage of the amplification characteristics of digital and social media. It is free, if you don’t factor in the time and work necessary to get traction for the book. It began with my official author site, supported by my personal Facebook page, which I converted to be mostly about my book. Indie authors absolutely depend on digital and social word-of-mouth to propel interest in the book. Reader reviews on the book's Amazon page are huge. The same is true for well-trafficked websites such as Goodreads and Readers’ Favorite. Geez, and I thought writing a book would be the hard part!

Active writing phases tend to last for months or even years. At least that’s how things have unfolded for me. I tend to write on weekdays and never on weekends, which is to say I hold myself to a regimen, though not quite a schedule. I write best in the early morning hours, when the house is still, before other demands on my time and attention kick in. A hot cup of coffee is mandatory. As is very low light. I work on a MacBook Air. I rest my fingers on the keyboard. My left-hand fingers touch the keys for A, S, D and F. My right-hand fingers rest on J, K, L and the semi-colon. My thumbs are on the space bar. Then I begin. On days when I just don’t feel like writing, I force myself to write one sentence…even if it’s crap. Usually that’s all it takes to get going. As a former friend once told me, if you write a page a day for a year, you’ve got yourself a book.

There are two more books planned for release now that A Bigger Piece of Blue is out there and available, both short story collections. The next one in line has a working title of Canyon Stories, though that’s likely to change. This second book is more keenly focused on the lives of people living in Oregon’s North Santiam Canyon, where I grew up. A strong sense of place has always factored heavily into my work. In fact, the reader wouldn’t be out of line to think of this narrow river canyon as a character—one whose impact permeates throughout. Still another way to think of the canyon is as a crucible that contains everyone and everything in its own particular and unforgiving way.

A BIGGER PIECE OF BLUE IS AVAILABLE ON LINE,
OR ASK YOUR LOCAL BOOK SELLER TO ORDER IT.