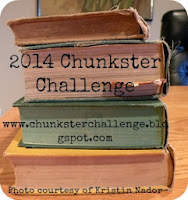 I read six books, as I had hoped to do. There is still time to reach my stretch goal of eight before the challenge ends.

The CHUNKSTER CHALLENGE was started by Wendy at Caribousmom and is now hosted by Vasilly at 1330V. The sign-up page is here.

The basic idea is to read books with 450 pages or more.

They have changed the rules some this year.  For the first time, apparently beaten down by the fuss, they are allowing e-books and audiobooks.  I'm a traditionalist and I understand the spirit that motivated the original "paper books only" rule, so I am going to limit myself to big fat paper tomes.

Also gone are levels at which to sign up.  This is now a self-motivating challenge.  My goal is to read six chunksters in 2014, with a stretch goal of eight.

Kristin Lavransdatter by Sigrid Undset. At 1168 pages, this was a massive chunk of a book.  This omnibus edition contains the three books of the trilogy that made Undset a Nobel Laureate: The Wreath, The Bride, and The Cross.  As engrossing as the story was, I think I've had my fill of medieval Norway for a while.

Murder on Board: Three Complete Mystery Novels (The Mystery of the Blue Train, Death in the Air, and What Mrs. McGillicuddy Saw) by Agatha Christie.  Two of the mysteries in this omnibus edition featured Hercule Poirot; one featured Miss Marples.  All were entertaining as can be.

The Rich are Different by Susan Howatch.  My hardcover edition had exactly 800 pages.  Although some pages were longer than others, overall the story moves at a brisk clip, following the financial and romantic adventures of New York investment bankers from the free-for-all of the 1920s, through the Great Depression, to the eve of WWII.  Howatch is the master of shaggy, intergenerational sagas -- she really knows how to spin a tale.

A Pillar of Iron by Taylor Caldwell.  This 780-page novel is a fictional biography of Marcus Tullius Cicero in the story of Rome in the days of Julius Caesar. It is great history, packed with political philosophy, just don't expect a book version of HBO's Rome.

The Golden Notebook by Doris Lessing.  I loved this novel about creative, strong women living in Africa during World War II and London in the 1950s, criticizing their men, questioning their careers, and quitting the Communist Party. That is, I loved it until the last 150 pages or so of my 600-page addition, when I felt it became repetitious and muddled.

A Wanted Man by Lee Child.  I love all Jack Reacher books and this was no exception.  All 600+ pages when by in a blink.

A Man of Parts by David Lodge.  This fictional biography of H. G. Wells focusses on the many love affairs in his life.  It was very good, but felt much longer than its roughly 450 pages.

There are many chunksters already sitting on my TBR shelves that may finally get my attention this year.  I am going to start with the first three because they cross over with my personal TBR challenge I call the 2X14 Challenge:

The Stories of Vladamir Nabokov (720)

The Charm School by Nelson DeMille (816)

The Life of Noel Coward by Cole Lesley (608)

Posted by Gilion at Rose City Reader at 8:00 AM 7 comments