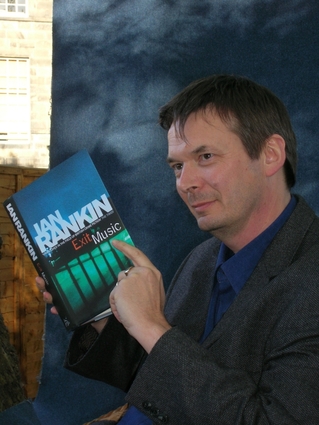 It took me a long time to stumble across Ian Rankin's Inspector John Rebus series, but now I am hooked. I have also started his Malcolm Fox series. Someday I'll get to his other books as well.

I first encountered Rebus when I tried to watch the television adaptation of the Rebus books staring Scottish cutie John Hannah.  But I couldn't understand a word they said!  And no subtitles for the Scottish impaired.  Then I finally figured out that the show was based on the book series and my problems were solved.

Normally, I am fiendish about reading a series in order.  But when I found the audio version of Strip Jack at my library, I decided to test it to see if I would like the series.  I did and now I am committed.

Those I have read are in red.  Those on my TBR shelf are in blue.  This is a list only of his Rebus and Fox books.

Death is Not the End

A Question of Blood

The Naming of the Dead

Standing in Another Man's Grave (Rebus and Malcolm Fox)

Saints of the Shadow Bible (Rebus and Malcolm Fox)

OTHER RANKIN FANS
If you have Rankin-related posts that you would like listed here, please leave a comment with a link and I will add it.

Posted by Gilion at Rose City Reader at 4:27 PM 8 comments