Kitchen Remodel, Week Six: Green is the Color of Spring 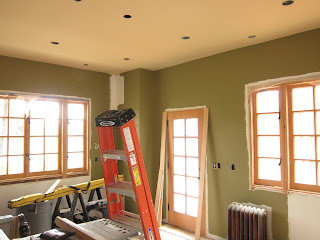 In anticipation of the arrival of cupboards later this week, we got some color in the kitchen.  The walls were painted the same green as our old kitchen because I love that murky, yellowy green shade. The ceiling is the same pale khaki color as the ceilings in the rest of the house.

We also have a door to the new powder room. Tiny! Here's James Builder demonstrating its diminutive proportions. 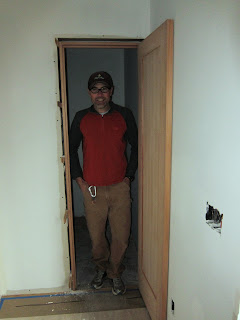 I've been reading food and cooking books during the kitchen remodel to buoy my spirits while cooking in a toaster oven.  But my current book is grim when it comes to food.  It sure makes me count my blessings!

Independent People secured Halldór Laxness his Nobel Prize, but his characters do not eat well.  Bjartur of Summerhouses and his family are early 20th Century "crofters" -- subsistence sheep farmers who live in a sod house in Iceland, with the sheep on the ground floor and the family huddled in the upper level.

With the cadences and vocabulary of Icelandic epic poetry, Independent People reads like a cross between J. R. R. Tolkien and Thomas Hardy.  The semi-literate characters starve through the winter and spring until they can grow a few meager vegetables in the home field and sell their scrawny sheep in the fall.


Other than a few batches of doughnuts or pancakes for celebrations, the only cooking described in the book was when the first wife -- about ready to give birth alone in the hut while her husband was lost in a blizzard -- killed and butchered a ewe, salted down the meat, and then gorged herself on a pot of offal stew.  The cognate, while false, is apt.

Posted by Gilion at Rose City Reader at 9:51 AM 12 comments