No Modernism Without Lesbians by Diana Souhami -- BOOK REVIEW 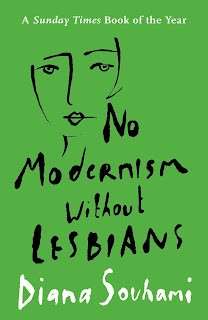 No Modernism Without Lesbians by Diana Souhami (2021, Head of Zeus)

Dianna Souhami's new history of 1920s Paris, No Modernism Without Lesbians, focusses on four women -- Sylvia Beach, Bryher, Natalie Barney, and Gertrude Stein -- who were at the center of the modernist movement. Beach started the Shakespeare and Company bookstore and published James Joyce's Ulysses. Bryher was a novelist, magazine editor, and heiress who used her fortune to help struggling writers. Barney was a writer and influential salon hostess. Stein was a patron of the arts and avant-garde author.

Sometimes group biographies are organized chronologically, or around big themes, discussing each person as relevant to the timeline or issue. Souhami’s book is more straightforward. It offers separate biographies of the four women, from birth to death. This makes sense. Although they all lived in Paris at the same time, were powerful forces in the modernist movement, and crossed paths, they were not a cohort. Now that they are combined between the covers, some of the highlights of the book are the cameos each woman plays in the others’ chapters.
Whether Souhami proves that her brash title is literally true misses the point of her book. Modernism was in the air, changing art and literature, and was happening if lesbians flocked to Paris in droves or not. But there is no denying that Beach, Bryher, Barney, and Stein all played big roles by sponsoring artists and writers and fostering the modernist community in Paris.

No Modernism Without Lesbians is a fascinating, lively history of Paris in the first half of the 20th Century. Recommended for readers interested in women’s history and books about Paris, art, or literature.
NOTES
Other reviews:
"[A] vivid cultural history ... This often gossipy, always smart romp trains a well-deserved spotlight on lesser-appreciated literary and artistic lives." PUBLISHERS WEEKLY
"A book about love, identity, acceptance and the freedom to write, paint, compose and wear corduroy breeches with gaiters. To swear, kiss, publish and be damned." THE TIMES