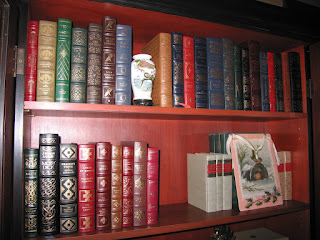 THE EASTON PRESS LIST OF 100 GREATEST BOOKS EVER
A while back, Easton Pres put together its list of the 100 Greatest Books Ever and described the collection as the "most renowned works of literature by history’s greatest authors." It was an interesting mix that includes books going back to ancient times, from around the world, and includes fiction, nonfiction, and poetry.

Easton Press used to sell the whole set in its fancy, leather-bound editions. The list is no longer on the Easton Press website and it no longer sells the books as a set, although they are available individually. They are also all available elsewhere in other formats and editions.

Here is the list, with notes about whether I've read a book, it is on my TBR shelf, or it is available as an audiobook from my library. So far, I've read of the 68 of the 100, but don't know if I will ever read them all. How about you?

Twenty Thousand Leagues Under The Sea by Jules Verne ON OVERDRIVE

A Farewell To Arms by Ernest Hemingway FINISHED

The Red Badge of Courage by Stephen Crane FINISHED

The Odyssey by Homer FINISHED

Tales From The Arabian Nights by Richard Burton ON OVERDRIVE

Oedipus the King by Sophocles FINISHED

The Hunchback of Notre Dame by Victor Hugo ON OVERDRIVE

The Last of the Mohicans by James Fenimore Cooper* TBR SHELF

The Portrait of a Lady by Henry James FINISHED

On the Origin of Species by Charles Darwin ON OVERDRIVE

She Stoops to Conquer by Oliver Goldsmith FINISHED

Of Mice and Men by John Steinbeck FINISHED

The Iliad by Homer FINISHED

The Count of Monte Cristo by Alexandre Dumas* FINISHED

The Aeneid by Virgil FINISHED

The Prince by Niccolo Machiavelli FINISHED

The Picture of Dorian Gray by Oscar Wilde FINISHED

The Decameron by Giovanni Boccaccio FINISHED

The Necklace and Other Tales by Guy de Maupassant TBR SHELF

Tess of the D'Urbervilles by Thomas Hardy FINISHED

The Red and the Black by Stendhal FINISHED

A Tale of Two Cities by Charles Dickens FINISHED

The Republic by Plato TBR SHELF

The Rights of Man by Thomas Paine ON OVERDRIVE

The Confessions by St. Augustine FINISHED

Tales of Mystery and Imagination by Edgar Allan Poe FINISHED

The Way of All Flesh by Samuel Butler* FINISHED

The Sound and the Fury by William Faulkner (reviewed here)* FINISHED

This is a repost of the list I first posted in 2009. The links needed refreshing.

* Marks those that I have in the fancy Easton Press edition, thanks to a lovely Christmas gift from Hubby.