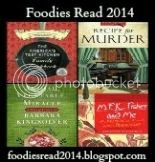 Margot from Joyfully Retired started the Foodies Read Challenge a couple of years ago, before passing the torch to Vicki from I'd Rather Be at the Beach, who is hosting the challenge on its own site, Foodies Read 2014.

This is always one of my favorite challenges.  I'm signing up again this year for the Pastry Chef level to read four to eight food books in 2014.

The Sharper Your Knife, the Less You Cry: Love, Laughter, and Tears in Paris at the World's Most Famous Cooking School by Kathleen Flinn (reviewed here)

In Defense of Food: An Eater's Manifesto by Michael Pollan ("Eat food. Not too much. Mostly plants." There's more to it.)

French Women for All Seasons: A Year of Secrets, Recipes, & Pleasure by Mireille Guiliano (maybe she should have left off with French Women Don't Get Fat)

The Pearl Diver by Sujata Massey (a mystery set in the Washington, DC restaurant world)

There are several possibilities on my TBR shelves, including:

Stuffed: Adventures of a Restaurant Family by Patricia Volk

The Tuscan Year: Life and Food in an Italian Valley by Elizabeth Romer

Epicurean Delight: The Life and Times of James Beard by Evan Jones

Posted by Gilion at Rose City Reader at 8:00 AM 10 comments