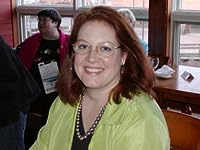 Julia Spencer-Fleming writes a series of mystery novels featuring a former army pilot, now Episcopalian priest, Clare Fergusson. Fergusson is the first female priest at St. Albans, the Episcopal church in the small Adirondack town of Millers Kill (as in the old Dutch word for river, but it sounds spooky, doesn't it?).

Spencer-Fleming has one several awards for her books and was nominated at least once for the coveted Edgar. She deserves the acclaim. This is one of the best-written, most intelligent mystery series going. The plots are creative and intricate. The pacing is solid, with exciting scenes that are actually exciting. The characters are complex -- Fergusson in particular is one of the most interesting sleuths out solving mysteries. Spencer-Fleming does a masterful job of having Fergusson maintain her spiritual role while wrestling with human issues.

The biggest of these human issues is the town's police chief, Russ Van Alstyne. Electricity sparks between pastor and cop from the get go. And while Episcopalian priests can date and marry, they are definitely not supposed to date married men, especially high profile citizens like the police chief. The sexual tension between the two is absolutely believable.

So too are the stories. One of the most difficult aspects of amateur sleuth series is how to get the amateur sleuth involved in solving so many murders. Spencer-Fleming handles this well, usually by having Fergusson face a minor mystery in the beginning -- something a small town priest could believably have to deal with -- and then only throwing in the dead body after Fergusson is well involved. There are still several "stay out of this; I told you to wait in the car" conversations with Van Alstyne, but they do not become a constant refrain.

There are seven books in the series and I've read them all. Hopefully there will be many more.

All the titles are the names of hymns:

Posted by Gilion at Rose City Reader at 2:00 PM 2 comments

Here Howard made the mistake of looking up and around him as public speakers are advised to do.  He caught sight of Monty, who was smiling and nodding, like a king at a fool who has come to entertain him.

-- On Beauty by Zadie Smith. From a scene where antagonist professors Howard and Monte are debating a point at the big faculty meeting.

This book won the Orange Prize in 2006.  I just finished it and am mulling what I will write in my review. I have mixed reactions.

Posted by Gilion at Rose City Reader at 8:11 AM 6 comments