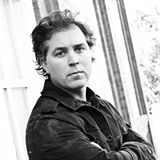 Bill Carter is a non-fiction author, journalist, and college professor. His latest book, Boom, Bust, Boom: A Story About Copper, the Metal that Runs the World, is the history of copper and the hazards and risks associated with mining a metal that plays a vital role in our lives. Carter is an outspoken opponent of the proposed Pebble Mine near Alaska’s Bristol Bay and hopes his book will spread awareness of this proposed mining development.

Carter has been interviewed by The Daily Beast, Sedona Monthly, and public radio, discussing Boom, Bust, Boom. And he was gracious enough to answer some questions for Rose City Reader.

How did you come to write Boom, Bust, Boom?

It was a combination of having spent time commercial fishing in Bristol Bay, Alaska, where the Pebble Mine issue was beginning to take shape, and also living in Bisbee, AZ, which used to be a world class copper mine. In 2007 there was a ramped up buzz in town about the mining company reopening the mine, which had shut down in 1975. Since that closure Bisbee had recreated itself into a very eclectic art town that combined old miners, hippies, artists, merchants and various characters that wanted to be far removed from mainstream America. Then the mining company started to test all our soil for heavy metals. My wife was pregnant with our second child and at the time I was busy making a garden in the back yard. Soon I became violently ill and then we got the test results from the mining company. It stated I had high level of arsenic and lead in my soil. I had been digging up dirt and putting in drip systems for months. Then I ate the vegetables. They moved us out of our house and replaced all our soil.

This got me thinking….a mine in Alaska would threaten the world’s greatest salmon fishery and the mine that used to be here still has the ability to inflict environmental damage to the town’s residents. There was a story here, all around me. Southern Arizona has ten copper mines and is one of the world’s great copper belts but for fifteen years of living here I have never spent a minute looking into that fact. That alone made me want to learn more and hence write a book.

You write about the history of copper, which is fascinating. Can you give us a few examples of how ancient cultures used copper?

Thousands of years ago copper was used as an ornamental metal and for making utensils, and for plumbing. Today in Egypt there still remains examples of copper plumbing dating back 4,000, and it still works. Then along came the Bronze Age and copper became the most sought after metal in order to make weapons. The Romans created their copper empire on Cyprus, which means copper in Latin. They invaded England to acquire tin and copper. They invaded northern Africa to seize the copper mines in Carthage, in modern day Tunisia. But it was the invention of electricity that truly vaulted copper onto the world stage, instantly making copper something every developing nation, state, city and house needed to jump into the 20th century.

How does copper “run the world” as you claim in the subtitle of your book?

Gold gets all the glamour and iron ore is something we see when we see a train or large ship, but in truth copper is the metal that literally allows our modern world to “run,” i.e. operate. Copper is our conductor of electricity and heat. Without copper, or a replacement, we would not be able to have electricity, phones, computers, airplanes or even what we consider to be first rate homes and buildings. The thing is that for the most part copper is hidden, behind our walls, under our hoods, in the back of computers, under our sinks.

Up until a decade ago copper was known as “Dr. Copper” on Wall Street. The reason? It was said that whatever the copper market was doing was the true bell-weather on what the overall economy was going to do because if copper is being bought that is an indication that countries are expanding. If the copper market fades then countries are holding back and thus the overall markets will also hold back. You can’t build new cars or any high tech product without using copper; or a new fleet of airplanes or new apartment buildings. All of it uses vast amounts of copper. As for “green” technology, well it uses lots and lots of copper, both windmills and solar farms.

How did you research the scientific and historical information and detail found in your book?

It took about two years to research. And as people rightfully point out some of my research is already dated, since the copper market changes monthly. Also new technology is constantly being created.

What is your professional background and how did it lead you to writing a book about copper?

I am a writer, journalist, photographer, filmmaker. I am also a teacher. My background is truly rooted in just being a curious human being and very passionately intrigued by the world we inhabit.

What is “acid rock drainage” and what does it have to do with copper mining?

It is the decay of naturally occurring metals that exposed to both air and water during the extraction process of copper mining. Copper is not alone in the earth. It comes with heavy metals, such as uranium, lead, arsenic, and many more. Once air and water hit these metals they begin to turn into “acid rock drainage.” Mitigating the run off is truly the monumental job of running a mine correctly. When you dig up a billion tons of earth figuring out how to stop this drainage from getting into our aquifers and watersheds is nearly impossible.

You make a good case for changing the 1872 Mining Law that allows copper mining on federal land without paying royalties – essentially allowing mining without the expense of repairing the land afterwards. This sounds like the kind of environmentally dangerous crony capitalism that offends people across the political spectrum. Are there any organized efforts to get the law changed and how can your readers get involved?

There are many groups hoping to change this law, most of them environmental foundations. But really this is a law all Americans should want changed, regardless of their political affiliation or their economic philosophies. This law allows the mining companies, foreign and domestic to pay $5 an acre to mine on federal land then pay zero royalties for what they make. That means they rake in billions and leave the waste behind for us to clean up. No matter how you look at this law and the fact that it is still in place, it is an injustice and careless management of our resources.

Jim Harrison is one of my all time favorite writers. I first read him when I was twenty-four. His language and deep appreciation for nature and life blew my mind. That he has become a friend and mentor in the past decade is like a dream for me.

The last book I read was Anthony Marra’s book A Constellation of Vital Phenomena. It was a stunning book. Absolutely amazing.

You have a terrific website and Facebook page, and are also on twitter and google+. From an author's perspective, how important are social networking sites and other internet resources to promote your book?

It is so important in today’s marketplace. The ability to reach people through social media is critical and if you ask those around me I certainly don’t do enough of it, but I do what I can. As for the websites and all that, it takes more time than I like, but then again so many people have come to learn of my books through social media, so it is a reality. I do appreciate its ability to connect me to my audience.

Never really been given advice, instead I know some great writers and consider them friends and what I find the great writers have in common is that they just do the work. Writing takes time, it takes focus and determination to finish.

Drifting in and out of stories. Listening to your dreams when writing a book and remembering moments that work in a story.

I am working on a new book. Fiction. It will be my first novel.

THANKS BILL! BOOM, BUST, BOOM IS AVAILABLE FROM POWELL'S BOOKS, OTHER ON-LINE SELLERS, OR FROM YOUR LOCAL BOOKSTORE (ASK THEM TO ORDER IT IF IT ISN'T ON THE SHELF).