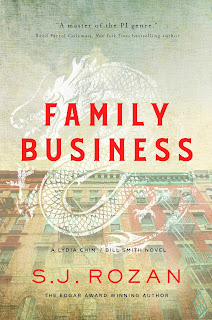 Family Business is first-rate entertainment. I loved how the story made New York City feel like a village by focusing on the interconnected “Chinatown” community. I put Chinatown in quotation marks because one of the cool things I learned was that there are many Chinatown neighborhoods throughout New York City, not only the one tourists walk through in Manhattan, down near Soho. Lydia, her extended family, and a network of characters who have known each other since high school cross paths on both sides of the law.

The plot centers around the Tong headquarters. Crime boss Big Brother Choi left the building to his niece upon his death. A hotshot young Chinese developer wants to buy the building to tear down for a condo development, which Choi opposed and so does his niece. The Tong members are divided over what to do with the building and who will take over now that Choi is dead. They also believe stolen riches may be hidden in the building. There’s plenty of action, some light humor, and enough complexity to keep your attention right to the end.

Even though Family Business is the 14th book in Rozan’s Lydia Chin/Bill Smith series, I had no problem reading it as a standalone. Rozan gives enough of the characters’ background to smooth over any blank spots.

Only after I finished it did I remember that I had dipped into the series before with Winter and Night, which won the Edgar Award in 2003. Bill Smith was the narrator and focus of that one, in contrast to Family Business that Lydia Chin narrates. I look forward to reading more of these fast-paced books. The relationship between Lydia and Bill is engaging, as is the way Chin’s mother treats Lydia’s non-Chinese boyfriend.