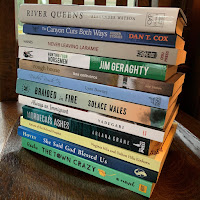 12 BOOKS TO READ IN 2021
A Year's Worth of Interesting Indies
Whether you are still in a reading slump from last year or just looking to liven up your 2021 reading list, here are 12 books to read in 2021 guaranteed to mix things up a bit. These indie authors and publishers have turned out top-rate memoirs, novels, short stories, biography, and travel books, so there is something here for every taste, or to fill in a a whole calendar of exceptional reads.

River Queens: Saucy Boat, Stout Mates, Spotted Dog, America by Alexander Watson (2018, Orange Frazer Press)
It took me a while to get to River Queens and I am so glad I finally did. What a delight! It's the memoir of Watson's adventure restoring an old wooden Chris-Craft boat he and his partner bought in Oklahoma and sailed back to Cincinnati, Ohio. It's a charmingly quixotic story of adventure, mishap, and the romance of river life. The real heart of the book lies in how Alexander and Dale, two urban, gay, landlubbers-turned-river-captains, are adopted by the community of small town and rural "river people" they meet along their inland journey. In these divisive times when it sometimes seems like no one gets along, it is nice to read a book and realize that people are really nicer than we remember.

Reading Dan T. Cox's new collection of short stories is like living in Oregon's North Santiam Canyon for a while. The stories overlap just enough you feel like you know the community, with its small towns, mills, forested hills, bad weather, and difficult lives of the people who live in this beautiful but struggling pocket of Oregon. Cox is an excellent writer in that you don't notice his writing -- the stories come straight at you. If you are a fan of Raymond Carver, you'll love The Canyon Cuts Both Ways.

John Haines was an adventure seeker from a young age. He biked through Tibet, kayaked the Niger River, and rode the Trans-Siberian Express from Beijing to East Berlin. A fall from a train in the Czech Republic in 1999 left him partially paralyzed and radically changed his life. His new memoir, Never Leaving Laramie, weaves the stories of his travels with his philosophy of travel as Haines writes about how growing up in Laramie, Wyoming gave him perspective and taught him lessons he carried with him around the globe. He ends with a chapter on his life since his accident and the different ways people can travel through the world.

Hunting Four Horsemen by Jim Geraghty (2020, Discus Books)
If you are in the mood for an up-to-the-minute thriller, Hunting Four Horsemen is the book for you. Set in 2021 when vaccines have corralled COVID19, but nothing is quite back to normal yet. Now the CIA's "Dangerous Clique" team of special operatives, lead by Katrina Leonidivna, must track down a new threat -- an anonymous arms dealer trying to sell a new bioweapon to terrorist organizations. This deadly virus would make corona look tame and plunge the world into chaos. It's non-stop action as the Clique races around the globe tracking bad guys, saving humanity, and trying to avoid some pretty nasty monkeys.

Rough House by Tina Ontiveros (2020, OSU Press)
Tina Ontiveros's memoir is a tough read but it lays bare what it was like to grow up in the logging camps of the Pacific Northwest. Raised by a charming but abusive father and a mother worn down by small-town poverty, Ontiveros writes with heartbreaking honesty about family dysfunction and intergenerational trauma. Rough House makes an excellent companion read with Dan Cox's short story collection, The Canyon Cuts Both Ways, because it is the nonfiction version of the same world, as seen by the women and children who live in it.

Dudes Rush In by Lynn Downey (2020, Pronghorn Press)
This debut novel takes us back to 1952 Arizona, the heyday of Dude Ranches, when war widow Phoebe McFarland leaves her settled life in San Francisco to spend six months on her in-laws' ranch. Her discovery of a diary from WWI years sets her on the path of a mystery and her own rebirth. The story is packed with engaging characters, plot twists, and memorable settings, and Phoebe is a smart and likeable heroine. Downey was the archivist for Levi Strauss, Co. and her skills as a researcher show in this page-turner of a historical novel.

Braided in Fire: Black GIS and Tuscan Villagers on the Gothic Line by Solace Wales (2020, Knox Press)
Solace Wales tells the story of the Tuscan village of Sommocolonia and the Black 366th Infantry Regiment that defended the village in WWII during the Battle of Garfagnana. At the center of her story are Lieutenant John Fox, who posthumously won the Medal of Honor for his heroism, and the brave Biondi family. Wales explores how the bonds between some of the Black GIs and Italian villagers, forged during the battle, remained strong for lifetimes. As the Black Lives Matter movement continues, Braided in Fire is a timely record of the Black lives given during WWII to save Europe from fascism.

Always an Immigrant: A Cultural Memoir by Mohammad Yadegari with Pricilla Yadegari (2020, White River Press).
Mohammad Yadegari was born in Iraq in an Iranian family. At 18, he moved to Iran to finish high school in Tehran. Later, he immigrated to the United States for college and graduate school where he met and married his wife Pricilla. He wrote his memoir in the form of personal stories and anecdotes about growing up in the Middle East in the the 1940 to early 1960s and then moving to America. He's a good storyteller and the book is full of humor and real life wisdom. Immigrant stories are a part of American life and it is fascinating to get the perspective of someone who immigrated from the Middle East in the mid-1960s.

Mordecai's Ashes by Arlana Crane (2020, Big Tree Press)
With Mordecai's Ashes, Arlana Crane launches her new Larsson Investigations series, set on Vancouver Island, British Columbia. Karl Larsson has lost his job in the Alberta oil fields and his wife, but he just inherited a detective agency in Victoria, BC. With nothing to lose and a lot to learn, he sets out to solve a mystery or two, his 19 year old cousin Kelsey as his sidekick. There are plenty of twists and turns, lots of PNW atmosphere, and a terrific story to keep the pages turning. All in all, Mordecai's Ashes is a fine kick off for what looks like a very entertaining series. It's always fun to start at the beginning.

Beloved Prophet 2020: The Abridged Love Letters of Kahlil Gibran and Mary Haskell, and Her Private Journals, edited and arranged by Virginia Hilu and Dalton Hilu Einhorn (2020)
Kahlil Gibran wrote The Prophet, which since published in 1923 has never been out of print, has been translated into over 100 languages, and is one of the best-selling books of all time. Gibran never married but had a long-time intimate relationship with Mary Haskell, to whom he was once engaged. This is a new edition of Beloved Prophet, the correspondence between Gibran and Haskell, which was first published in 1972. This edition has been pared down about 40% to make it more accessible to a general audience, editing out the parts of interest only to academics. Beloved Prophet is a must read for die hard Gibran fans.

She Said God Blessed Us: A Life Marked by Childhood Sexual Abuse in the Church by Gail Hovey (2020, Exposit Books)
Hovey's memoir discusses the often overlooked issue of sexual abuse of girls by women. But don't be put off by the subject matter. It is really the story of how easily young people can be enthralled and exploited by someone older who seems  charismatic simply by showing the young person a little special attention. That manipulation leads to feelings of guilt and shame that take a long time to recognize and and even longer to understand, well into adulthood. When Hovey was a teenager, she was emotionally and physically seduced by Georgia, the education director at her church. It took her decades, including a move to South Africa, to break free of Georgia's influence. Hovey tells her story well, with compassion and insight. She Said God Blessed Us is a memoir worth reading for anyone whose family has been touched by abuse or who wants to understand dynamics and effects of abuse.

The Town Crazy is set in Hanzloo, Pennsylvania, a suburban Catholic community in Pennsylvania in 1961, when a single father moves to town with his son Felix. The dads are suspicious, most of the moms are smitten, and Lil O'Brien, one of the town moms, seems to be losing her mind. Felix befriends his classmate, Lil's daughter Alice, but when the town busybody jumps to a conclusion of misbehavior, tragedy follows. Meanwhile, Lil's bottled-up secret is leading to greater emotional collapse. This character-driven, captivating story will keep you engaged from cover to cover.
GO AHEAD -- FILL YOUR CALENDAR WITH THESE 12 INDIE BOOKS!