Review of the Day: 99 Novels 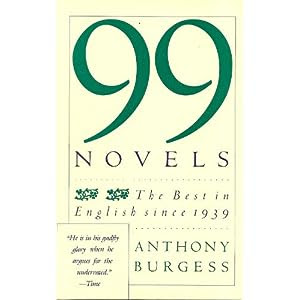 99 Novels: The Best in English Since 1939 by Anthony Burgess.

It was the arrival of 1984 (the year, not the book) that inspired Burgess to compile a list of what he considered to be the 99 best novels published since 1939. He explains his inspiration in the introduction:

For thirty-five years a mere novel, an artifact meant primarily for diversion, has been scaring the pants off us all. Evidently the novel is a powerful literary form which is capable of reaching out into the real world and modifying it. It is a form which even the non-literary had better take seriously.

Why he chose to include only books published since 1939 is a little less clear. Burgess says only that "it is more poetic to begin with the beginning of a world war and to end with the non-fulfillment of a nightmare." His book choices, like his timeframe, are his alone. He chose books that brought him reading pleasure, but also "concentrated mainly on works which have brought something new – in technique or view of the world – to the form."

Each book, discussed in chronological order, gets only about a page, sometimes two, of Burgess's keen analysis. He briefly describes each book and a little about its circumstances, such as its historical context, how it fits in with the author's other work, or how it was received. He explains why he thinks it is significant and why he enjoyed it. Then he usually wraps up with a pithy little conclusion, such as, "The vitality of Saturday Night and Sunday Morning compensates for its faults of form," or "Written in the middle of the swinging sixties, it has a very clear vision of Western moral decay."

His mini-reviews are generally compelling. Some make you want to hole up with a particular book immediately; others engender respect for the choice, but little actual excitement. For instance, after reading 99 Novels, I am eager to crack the spine on The Girls of Slender Means by Muriel Spark ("Brilliant, brittle, the production of a fine brain and superior craft"), but not looking forward to Riddley Walker by Russell Hoban, a post-apocalyptic story written entirely in a made-up dialect ("This novel could not expect to be popular . . . [b]ut it seems to me to be a permanent contribution to literature").

It becomes apparent that Burgess was drawn to novels exploring the concept of free will. In particular, several of the books he chose deal with the exercise of free will in the face of religious tradition or political tyranny and suicide as an expression of free will. In discussing these concepts, Burgess doesn't avoid spoilers, probably because his analysis requires looking at the whole story. For those who enjoy the process as much as they payoff, this won't matter, but be warned.

The best part of 99 Novels is the introduction, in which Burgess expounds on the art of fiction, what he thinks makes a good novel, and the joys of reading. Filled with such gems as "BOOK can be taken as an acronym for Box of Organized Knowledge," and including a fervent apologia for popular fiction, this essay should be required reading for any bibliophile.

NOTES
The list of 99 novels Burgess chose can be found here.  I've read several books because they were on this list and greatly enjoyed them.


OTHER REVIEWS
If you would like your review of this book listed here, please leave a comment with a link and I will add it.

Posted by Gilion at Rose City Reader at 12:40 PM 5 comments